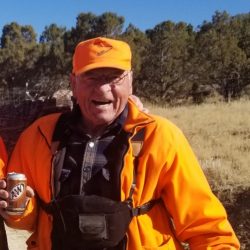 Jerry was one of the most celebrated, respected, and honored citizens of Montrose in the past sixty years.

Open Air Celebration of life for friends and family at Western Gravel in Montrose, Tuesday, December 8, at 1pm, Masks Please.

In lieu of flowers, Memorial Contributions can be made via:  gofundme.com/f/Jerry-Trudell

Jerry was one of the most celebrated, respected, and honored citizens of Montrose in the past sixty years.  Along with his beloved wife JoAnn, of 56 years, together they raised their blended families of 6 children and forged a successful business through grit and hard work. Jerry was raised on a ranch in eastern Montana on the banks of the Missouri River, near Fairview. Knowing the ranching life was not for him, he left home at 16 after graduating High School.  Jerry had always been mechanically inclined and served in the US Army as a Mechanic at the close of the Korean war and was stationed in Germany. After his honorable discharge from the Army, Jerry met and married Nancie L. Ross. Together they had four children, Ray, Kim, Bill, and Laura (Annie).  They subsequently divorced in 1962.  In 1963, Jerry and JoAnn reconnected.  She was a childhood friend who had been widowed at the age of 26 and had two young children, Judy and Brian Wilson; in 1964 they were married in Montrose.  Their small family grew to eight when Ray, Kim, Bill, and Laura came to live with them in 1968.  Their “Brady Bunch” family managed to thrive in their small three-bedroom house through their combined efforts as drill sergeant, referee, nurse, chef, and teacher.

Jerry was known to everyone as a man of many talents!  He was most likely the original “MacGyver” as he never met a problem he could not solve!  He holds engineer patents for his stacking trailer and has countless other creations that he manufactured in his shop, most notably his pontoon boat that was always under some type of upgrade.  Even at the young age of 88, Jerry had enough plans for the future that would have kept him busy for the next 20 years.  He was always full of ideas of how things could be made better whether the subject was construction projects, hunting and fishing, real estate, government, or relationships. Jerry loved to work; it gave him purpose and pleasure of accomplishment.

Early in their marriage, Jerry began working at O’Dunlap & Son Trucking as a mechanic.  Years later he began working for Schneider’s Ready Mix.  He bought Schneider’s and branded it as Western Gravel and turned that business into one of the premier construction companies in Colorado. Jerry was still working there 5 days a week when he fell ill on November 12, 2020.

Jerry was very civic minded, along with his wife JoAnn, the two of them worked hand-in-hand to selflessly devote their lives to the city of Montrose with civic donations in materials, time, and financial contributions.  Jerry and JoAnn have always lived their lives believing that everyone deserves a second chance.  Jerry showed it in many ways, and most notably as he gave many inmates in work-release programs a job and second chance.  Jerry was a big believer in a “hand up, not a handout.”  Additionally, he was always willing to give fatherly advice (or… a not so fatherly “Ass Chewing”) to help folks stay on the right track.  No job or task was too small to for him to teach! Whether it was the proper use of a broom, welding, or using a tape measure correctly  (there is a difference in 1/8 and a 1/16, you better remember that it makes a difference!).  A person might even get fired twice in the same week.  Those that endured his mentorship were always richer for his leadership.  There was only one way to do something right, and that was the “Right Way,” and Jerry was often most sure he knew what way that was!

Along with his strong work ethic, Jerry had many recreational hobbies he enjoyed.  He was an avid hunter and fishermen and he traveled the globe on many expeditions.  Jerry was the consummate local hunting guide.  Many children, grandchildren, friends, and friends of friends considered hunting with Jerry a rite of passage and a bucket list activity.  One of his greatest joys was helping someone bag their first elk! Jerry made sure the entire family learned to ski, hunt, fish, shoot a bow, camp, and use a rifle or pistol properly.  Jerry was also an avid competitive bowler offering lessons whether you wanted them or not.  He carried a 185 average until this past year when he suffered a shoulder injury.  Not to be deterred, classic Jerry style, he taught himself to bowl left-handed and this past month, bowled over 200!

Many a summer weekend was spent going camping in an old short body Scout with everything piled on top for a full 4 days of camping, Each trip began just as soon as Jerry came home from work.  JoAnn was in charge of the troops (6 kids & a dog) while also preparing all the food & supplies, requiring an amazing amount of effort. Making these adventures possible provided so many life skills amidst these fun family days, whether you wanted them or not!

If not camping, hunting or fishing, it was probable that you would find Jerry and JoAnn in their motor home traveling throughout the United States or at the Norsk Hostfest in Minot, North Dakota every fall.  This festival celebrates the Scandinavian roots he and JoAnn share.  In recent years, this tradition included many children and grandchildren in attendance.

Jerry was a man who never looked back, he kept his eye on the future, and was always looking for the next project or adventure to take.  He was proud of his family, his work, his business, his community.  His greatest legacy was his belief and practice of love, generosity, hard work, decency, fairness, an honest day’s work, and embracing those in need.  If you were lucky enough to know Jerry and you happened to be in a restaurant at the same time he was, you often found that when you went to pay your bill, it had already been mysteriously paid by Jerry.  It was one of his trademark gestures of generosity, and he did this hundreds and hundreds of times throughout his lifetime.

Jerry was proceeded in death by his Mom & Dad, two brothers, two sons, and three grandchildren.  He is survived by JoAnn, his Bride of more than 56 years.  She along with family, children, grandchildren, great grandchildren, nieces, nephews, brothers, sisters, and friends will miss the loving, kind, selfless, generous, man Jerry was.  His legacy will always live on through our collective will to generously give back to the world and carry on in spite of whatever difficulties we face.

Open Air Celebration of life for friends and family at Western Gravel in Montrose, Tuesday, December 8, at 1pm, Masks Please.

In lieu of flowers, Memorial Contributions can be made via:  gofundme.com/f/Jerry-Trudell