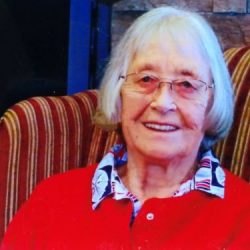 Olathe, CO  –  Jeannette Callender Hepp passed away on December 7, 2020 after a life exceptionally well-lived for 94 years. She was born and grew up in Oak Park, Illinois with an outgoing spirit and intrepid sense of adventure.  During WWII she played women’s pro baseball in Chicago where she met her future husband Don, a sailor on a blind date.  After the war they married and moved to Oregon – building their first house together with materials salvaged from a flood.  His electrical engineering and Navy career brought Jeannette and children Donna and Michael, to New Jersey, Hawaii and back to the Pacific Northwest.  Retirement on the Oregon coast included building another house themselves with family help and combining a zest for travel with Lions Club projects.  Over the next 12 years they explored the world touring New Zealand, Australia, Africa, Mexico, England, Scotland, France, Germany, Japan, China and Russia.

After Don’s death, Jeannette moved with the seasons, between Colorado and warmer winters in Florida, South Texas and Arizona. She settled in Montrose, where she enjoyed watching her grandsons’ games and boating at Ridgway Reservoir.  Summer and fall found her in Ouray, as a “polar bear” doing water aerobics, and an active Daughter of Rebekah.  Jeannette lived in Dupont, Washington for several years and then returned to stay in Colorado.

Jeannette loved her family, people and having fun.  She was a story-teller, avid beach-walker, sports fan, traveler, “card shark” and never met a stranger. Always the life of the party, Jeannette was known for singing and dancing the “12 Days of Christmas” Hawaiian-style – teaching everyone to hula, a serious bridge and cribbage player and loved to sing.  Her smile and positive spirit remained strong, despite declining health over the last three years.