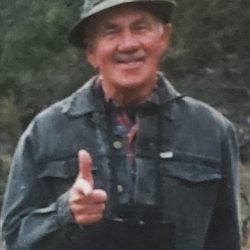 Service Date Services will be held at later date.

A memorial service will be held at a later date.

Jim was born in Elizabeth, New Jersey in 1932. He joined the army in 1950, spent 9 months on the frontlines during the Korean War and was honorably discharged as a Sergeant 1st Class in 1953.

He married Barbara Ellen Fatherree in 1958 in Arvada and raised 2 fine sons. He retired at age 49 to Montrose; became active in the Civil Air Patrol and later became a Certified Flight Instructor.  Jim really loved to fly.

He was a runner, a hunter, a pilot and enjoyed traveling in an RV with his wife, Barb, having many adventures in Alaska over the years.  He was involved in so many outdoor activities, its hard to list them all.

Jim is survived by his wife, Barb, sons Ron and Jim Jr., 4 grandchildren, 2 great grandchildren, and his sister, Caryl, as well as several nieces and nephews.

A memorial service will be held at a later date.