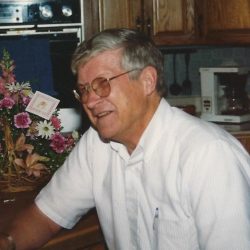 James E. (Jim) Miller was born July 3, 1936 in Tampa, Florida to James Mitchell Miller and Myrtle Ziglar Miller. He grew up in Arcadia, FL where he graduated from DeSoto High School in 1955. He then attended the University of Florida.

He was employed by Pan American Airlines in their Missile Tracking Division located in the Caribbean Islands and Cocoa Beach Florida. Following this he attended Tampa Technical Institute where he completed work to be a Computer Programmer.

He was hired by The First National Bank in Ft. Myers, FL as a computer programmer then advancing to the Loan Dept. He attended special banking courses in Chicago, IL.

After his father-in-law passed away, his brother-in-law asked him to come to work with him at the Watson family sugar cane farm in Lake Harbor, FL. where he first served as bookkeeper and later as manager/overseer. Jim and his family lived in Clewiston, FL during this time. He was active in the First Methodist Church and the Rotary Club serving a term as President.

He moved with his family to Montrose, CO August 21, 1977 where he began San Juan Log Homes with Carl Woerner, whose family had moved with the Millers from Clewiston FL.

He later branched out into real estate sales culminating in starting and owning his own company, Kienholz/Miller Real Estate where he was the broker. He bought a farm on Spring Creek Mesa and farmed 15 years. He was also a partner in Pollard Brothers Motors and H&R Block in Montrose.

In 1995 he and his wife, Elizabeth, moved to Lindale, TX to volunteer at the International Office for Mercy Ships, serving as CFO. They returned to Montrose in 2001.

After retiring from all his business associations, he enjoyed traveling and camping especially. For a number of years, he and his wife enjoyed spending several winter months camping in southwest TX.

He was a member of Grace Community Church.