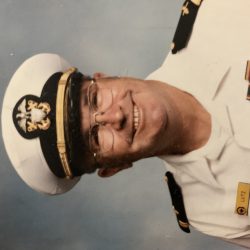 Services will be held at:

A Celebration of Life to be held at 63620 Jig Rd., Montrose, immediately following graveside.

The fourth of six children of Willard and Melinda Lutz, Jack’s family were avid farmers in the Shavano Valley and active members of the community. A long-standing family joke pointed to the remains of an old covered wagon just off of Highway 50. Generations of new family members learned, “that was the covered wagon grandma and grandpa used from Nebraska to Montrose”.

Jack graduated high school in Montrose, attend college and played football at Western Colorado University in Gunnison before entering the Navy in 1962. This new path was shared with his lifelong best friend and brother Jerry Lutz.

Early in his career Jack married Jo Darleen Edesa and had two sons Jeffrey and Jimmy. Jack’s career took him away on two tours in Vietnam along with several family moves around the world. A pinnacle moment in his career occurred when he assisted the recovery of Apollo 14 mission commanded by Alan Shepard. Two years later Jack was faced with the tragic passing of Jimmy. The stress culminated in their divorce in 1974. He assumed the new role of single father for the next six years.

Jack ascended to the distinguished rank of Chief Warrant Officer 04. During this time Jack happened upon a new love interest. Shortly after meeting Patti Nelson they became wed and he selflessly and lovingly took on a new family of six. Jack parented as he served; with rigor, discipline, purpose and love. This love continued for the next 19 years. Their divorce was the catalyst for Jack to move back home to Montrose.

Jack served his country, family and community proudly. His strong love of family extended to his nephews and nieces Terry, Tim, Martin, Kristi, Roxy, Lori and Tammy along with their children. Jack was a central figure in all of their lives. He was loved and revered as “Papa Jack or Great Uncle Jack”. Best known for his broad smile and boisterous humor, Jack brought laughter to every endeavor. You could find him swapping stories every morning at the Truck Stop, The Shanty and The Cabin with many of Montrose’s finest.

A passionate hunter, camper and fisherman…he always loved his dogs, donkeys, and horses. He spent his summers camping with family and grandkids. Come October he prepped the horses for elk hunting in West Elk Wilderness. He and his family hunted this area since 1965 where he shared his love for the great outdoors.

Jack always said his greatest accomplishment was his family. He is survived by his 6 children Jeff Lutz, Debbi Roberts, Michael Nelson, Eric Nelson, Danielle Ramirez and Cari Barlow, and 17 grandchildren.

Services will be held at:

A Celebration of Life to be held at 63620 Jig Rd., Montrose, immediately following graveside.

In lieu of flowers, please consider donating to the family to assist with expenses.