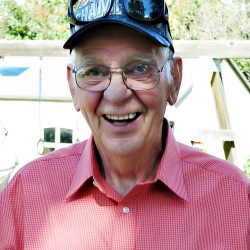 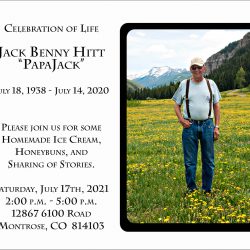 Jack was born in Dalton, Georgia to William Clea and Tennie Bishop Hitt on July 18, 1938.  He was the 7th of 8 children. After graduation from Dalton High School in 1956, he enlisted in the Air Force.  While stationed in Topeka, Kansas, he met his future wife on a blind date on New Year’s Eve. He married Doris Fae Glasgow in 1959. In Kansas, Jack started building houses and even made an RV out of a school bus while working at Goodyear as an electrical technician. They went on to have four children, Brad, Brian, Barry and Brenda and were married for 28 years. Even though this marriage ended in divorce, they remained friends.

Jack was truly a “Jack of all Trades”. From the time he moved to Montrose to stay in 1969, he had an impact on many aspects of the community. Jack was an electrician by trade, but also a builder and a visionary. He was a commercial pilot, real estate agent and residential contractor. As a builder, Jack also built redwood hot tubs, houseboats, the original Rocky Mountain Racquet Club, KFC, The Magic Circle Theater and numerous houses. Jacks fingerprints are all over the community, he was always willing to help friends with their remodel projects. Jack was very active in the theater and had a rich circle of friends. He was very active in supporting Boy Scout pack trips, including flying in and dropping supplies to the boys during the trips.

Jack traveled on many electrical jobs in the 80’s and 90’s, California, Washington, Georgia, Montana, & Minnesota to name a few.

Jack had many talents and loves but some of the things he was most passionate about were, spending time at the cabin in Little Cimarron with his family, flying, singing, and telling stories.

Family was so important to Jack and once he had his first grandchild, his name got forever changed to “PapaJack”. Not only did his grandkids call him PapaJack, everyone called him PapaJack.

Jack settled back in Montrose in 2002. Jack met a new love in his life in 2010, Ethel Kissner. Jack and Ethel spent 7 wonderful years together before she passed away in February 2017. Jack was also preceded in death by 5 of his siblings, Helen, Clea, Faye, Opal, and Evelyn, and his grandson, Brandon Jay Hitt.

Jack is survived by his children: Brad Hitt, Brian Hitt, Barry Hitt, and Brenda and Steve Metheny. He loved each and every one of his grandchildren, Sara, Brandon, Lauren, Dustin, Jackie, Mark and Joe. Jack is also survived by his brother Buddy Hitt and sister Judy Hitt.

Per Jack’s wishes, there will be no services, but there will be a Celebration of his Life to be scheduled at a later date. Memorials may be given to the charity of your choice. Crippin Funeral Home, of Montrose is assisting the family.