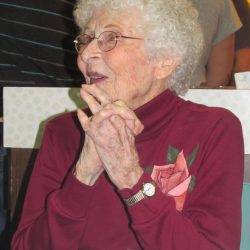 In lieu of flowers, the family encourages donations to Hopewest Hospice.

A grave side service will be held at the Grand View Cemetery on December 21 at 11:00am followed by a celebration of life at the Walker Home.

Iola Pearl Walker went to be with the Lord on November 27, 2019.  She was born on July 3, 1922 to Alexander and Maude Cope in Meade, Kansas.  In 1937, the Cope family moved from the harshness of the Oklahoma dustbowl to the beauty of the San Juan mountains where they settled in Ridgway, CO.  Iola then moved to Montrose where she lived with her sister Paulene.  After high school graduation she and a friend moved to Kansas City where she was a dance instructor.  There she met and married Paul Kenneth Coulter and had a son, Kenneth Ray.  She later returned to Montrose.  In 1954, she married David Walker and they had two children, Steve and Bonni.  She was a wonderful mother and homemaker in addition to helping with office work in the family business of Walker and Krill Builders and Contractors.  She was an active member of the Montrose First Baptist Church.  After David retired they enjoyed traveling and were involved in the ministry of Youth with a Mission (YWAM) throughout the world.  Iola was preceded in death by her husband David and daughter Bonni Crockett, sister Paulene Wright and brother Harold Cope.  She is survived by her sons Ken and Steve of Montrose, 8 grandchildren: Grace and Jillian Walker, Jeremiah Walker, Josh, Matthew, Jaden and Micah Crockett and Wendy Josephson and 13 great-grandchildren who all affectionately called her ‘Grandma Pink’.  Iola will always be remembered for her selfless love and devotion to God, her family and to those who knew her.   In lieu of flowers, the family encourages donations to Hopewest Hospice.

A grave side service will be held at the Grand View Cemetery on December 21 at 11:00am followed by a celebration of life at the Walker Home.