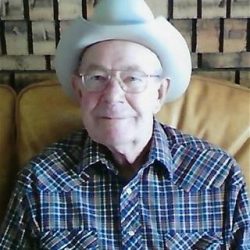 A Funeral Mass will be held on Thursday, March 23, 2017 at 10:00 a.m. at St. Mary Catholic Church, Interment and concluding service will follow at Cedar Cemetery, east of Montrose. Arrangements are under the direction of Crippin Funeral Home & Crematory, Montrose, CO.

Herman F. Waugh was born April 4, 1931 to Clark and Mabel E. (Corbally) Waugh in Montrose, Co.  He spent his childhood and received his education in Montrose.

At the age of 23, he enlisted in the United States Army for two years.  Herman was a welder and was employed with Union Carbide for 30 years in the Montrose area.  He had four children from his first union, then married Raye Kirby on Sept. 3, 1983 in Paradox, CO.  Herman and Raye had shared 27 wonderful years before Raye passed away on June 2, 2010 in Montrose.   He was a member of St. Mary Catholic Church in Montrose.  Herman enjoyed the outdoors and spending time with family, and he loved to ride horses.  His two most favorite interests were his fishing and hunting.

In lieu of flowers, Memorial contributions may be made to Hospice & Palliative Care of Western Colorado, 725 South 4th Street, Montrose, CO.  81401.