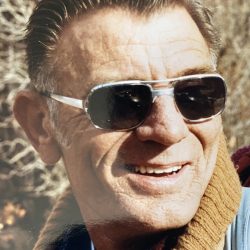 A private memorial service and celebration of his life was held on Sunday, November 7th with his close family.   In lieu of flowers, Memorial contributions can be made to the Shriners Children’s Hospital at www.donate.lovetotherescue.org .

Harold Lewis Hansen, age 87, passed away peacefully on November 4, 2021, in Montrose.   Harold was born in 1934 in Seward Nebraska and moved to his longtime home of Montrose in 1964.

`Harold is survived by his wife Goldie Hansen who resides in the home they built together in Montrose, his daughter Cindy Meyer (Louis) from Durango, Grandchildren Evan Meyer from Mancos CO, Brittany Osborn (Tom) in Durango CO, and Great grandchildren Maya and Leif in Durango.   Harold is also survived by Siblings Howard, Donna, and Donita and families from Nebraska and brother Dean and family in Denver.

Harold is preceded in death by his parents Laurith and Clara Hansen, Son Ron, and Sisters Dorothy and  Dolores.

A private memorial service and celebration of his life was held on Sunday, November 7th with his close family.  Arrangements are being made by Crippin Funeral Home, 802 E. Main Street in Montrose.  In lieu of flowers, Memorial contributions can be made to the Shriners Children’s Hospital at www.donate.lovetotherescue.org .

Harold was raised on farms in Seward and Burchard Nebraska.   After he and his wife Goldie moved to Montrose in 1964, he began his long career as a home builder in Montrose as a founder and owner of H & P Construction along with his business partner Hugh Phillips.   He later founded Hansen and Phillips Realty with Hugh Phillips as well.   Harold built more than 200 homes in Montrose along with schools and other structures in the area. Many of the homes he built was alongside his son Ron.

He was in the military in 1953 leaving it with an Honorable Discharge.

The true measure of Harold, however, was not the many accomplishments but rather how he could make you feel.  To his close friends and family, he will be remembered for how he had the knack of making you feel like the most important person in the room.   He was always quick with a favorite joke to start each conversation and immediately made you smile.  His smile was ever-present and contagious. He immediately noticed something unique and complimentary in every person.  He was the first to help homeowners, neighbors, family, and friends by showing up at all times of the night and day to assist in anything that needed attention or repair.

His household was not complete without the love and companionship of his many pets including dogs, cats, horses and yes, the occasional pet raccoon, rabbits and a pigeon, much to the chagrin of Goldie. He was the first to be on the ground playing and laughing with his kids, grandkids, and great grandkids, who affectionately called him Nampa.  He was a fixture in local parades all over the West Slope driving his small white Shriners car, usually accompanied with a wide-eyed child experiencing their first ride in the parade.  He and Goldie loved spending time with family on Lake Powell on their houseboat and traveling throughout the US in their RV visiting all contiguous states.

“Nampa” will be sorely missed; however his legacy will continue on with his daughter, grandkids and great grandkids who will remember his generosity, community service, craftsmanship, smile and that positive gleam in his eye.