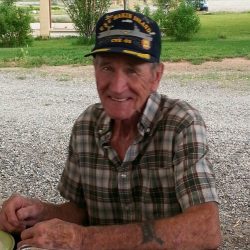 Harold E Wolfe, age 95, passed away on Sunday September 26 with family around him.  Harold was born in Parma, MO. to Pearl and Ethan Wolfe.  He grew up in Ft. Wayne, IN.  He followed in his father’s footsteps to be a barber at 15 years of age and went to barber colleges in Indianapolis and at St Louis.  He joined the navy at 17 years of age to serve on several aircraft carriers in the Pacific during WWII.  He received a Purple Heart during his service and was honorably discharged.

In 1946, he married Florence S Staak.  They had three children together and were married 68 years.

After WWII, he returned to Indiana and worked as a barber and heavy equipment operator.  He was adventurous and decided to go to Alaska and homestead a piece of land.  While in Alaska he was called back into the service for the Korean War.  He was honorably discharged in 1952.

Eventually, the family moved to Delta Colorado, where they lived for fifty years.  He did many things including barbering, managed a ranch, farming, heavy equipment operator, carpentry, carpet, and linoleum installation.  Two of his great loves were hunting and fishing.  The family was always well provided for with meat, fish, and a great garden.  In the last fifteen years, Harold and Florence moved to Olathe where they enjoyed retirement.

Harold was preceded in death by his parents, son Michael, and his wife Florence.  He is survived by his sister Sylvia Bennion, his children Greg Wolfe and Kay Quick, grandchildren, great grandchildren, nieces, and nephews.