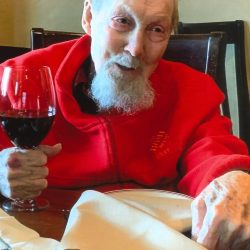 A celebration of life service will be held on Tuesday, June 30th, 2020 at 11am. Hosted by the Calvary Chapel, 2201 S. Townsend Ave. Suite D Montrose CO, 81401, with the Pastor Ben Garate officiating. All are welcome to join if able.

A celebration of life service will be held on Tuesday, June 30th, 2020 at 11am. Hosted by the Calvary Chapel, 2201 S. Townsend Ave. Suite D Montrose CO, 81401, with the Pastor Ben Garate officiating. All are welcome to join if able.

Jack was born in Berkley, CA on December 21st, 1931. He attended Whitter High School, and then graduated from Whittier College with a Bachelor of Arts in 1954. After college, he joined the Coast Guard to serve our country for two years during the Vietnam War. He married the love of his life, Linnetta on August 15th, 1981 in La Habra, CA. Jack and Linnetta bravely moved to Colorado in 1996 after spending their entire lives in California. They remained happily married for nearly 40 years. Jack’s health declined in his later years and Linnetta became his caretaker – she lovingly looked after his every need until his last day.

Jack enjoyed a long career as an electronical tool salesman, and Marketing Manager for more 45 years. After a failed attempt at retirement, he joined the Home Depot team for the Montrose store opening 17 years ago. He loved going to work every day to see the people and give them a thumbs up following the usual “Happy Day”. He had a lifelong love of cars, and was involved in the Black Canyon Car Club for many years. Every Thursday morning, he joined other Veterans for coffee and conversation. Jack always enjoyed sharing his patriotic sense of pride. He was well known as a kind, mild mannered, loving father and husband, who held a deep sense of faith in God, – he will be greatly missed by all who knew him.

Memorial contributions may made to the Calvary Chapel of Montrose. The Spiri family wishes to extend our sincere thanks Pastor Ben and Judy Garate, as well as all those that have offered their love and support during this difficult time.