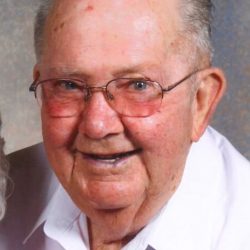 A celebration of his life will be held at Crippin Funeral Home in Montrose on Thursday October 10th at 11:00am.  Internment will be at 3:00pm at Grand View Cemetery.  If you would like to bring a written memory to share with the family.

He attended school in Delta and graduated in 1948.

After serving two years in the Korean War, Dude continued to work at Independent Lumber, where he started at age 14. His responsibility and knowledge grew as he traveled with the company.

In 1968, Dude and his friend, Bob Jackson, bought the lumber yard in Montrose. The name was changed to J&M Lumber. It continued to prosper until it sold in 1995.

The whole family spent time four wheeling on the Waterdog property. They also traveled with family in their retirement years.

He was a business man, known for his friendship and integrity.Dude was preceded in death by his parents, six brothers, two sisters and son Danny.

We will all love and miss you always PaPa Dude.