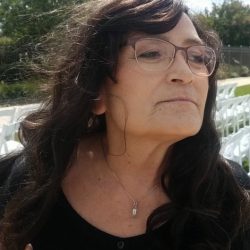 Georgiana we love you and you will be deeply missed.

Georgiana Russell was a caring wife, mother, grandmother, sister, aunt and friend. At the age of 65 she left this world after a long courageous battle with cancer. On the morning of November 12th she passed away in her home surrounded by her loving family.

Georgiana was born in Montrose, Colorado on August 27, 1955 to the loving parents of Frank V. Rocha and Nellie M. Rocha who preceded her in death. She graduated from Montrose High School in May of 1974. At the age of 18 she began working for a company called Developmental Disabilities which is now Community Options and eventually became Program Director. She dedicated 47 years of her life advocating for individuals with developmental disabilities. During the many years of working for Community Options she made some very special friends that were close to her heart.

Georgiana’s only child, Nicholas Ryan Ladage (father Harold Ladage), was born on September 20, 1978. He was the light of her life. She was very proud of Nicholas for starting his own business and loving and providing for his family.

On February 16, 1984 Georgiana married the love of her life, Charlie Russell. They spent 36 great years together and could always count on one another.

Georgiana’s son Nicholas and her grandchildren Joshua and Michaela were her heart and joy. Georgiana or “Nana” as she liked to be called by her grandchildren cherished all the special moments they shared together and she spoiled them any chance she got. Georgiana could be heard proudly bragging about her grandchildren and their accomplishments. Besides spending time with her family she liked to watch game shows and had an impressive collection of precious moment knick knacks. She looked forward to Sunday morning family get togethers and liked to go on shopping outings with her sisters.

Georgiana we love you and you will be deeply missed.