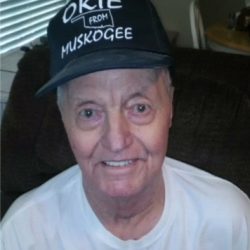 The funeral service will be held Saturday, May 12, at 1:00 p.m., at the Crippin Funeral Home Chapel 802 E. Main St. Montrose, Colorado. Gene will be laid to rest at the Olathe Cemetery with the ashes of his beloved wife.

Gene G. Clark
March 26, 1934 – May 8, 2018
Gene Clark, 84, peacefully passed away May 8, 2018, at HopeWest Hospice Care Center in Grand Junction, CO.
He was born March 26, 1934, in Olathe, Colorado to Henry Darwin and Ruby Ann (Hartley) Clark. Gene was a western slope resident since birth, he was a retired Mountain Bell/AT&T “Telephone Man” of 30+ years. He was a lifetime member of the Elks Lodge. He enjoyed coaching his two sons in Little League baseball when they were younger.
He married Phyllis Hoback (deceased) in Grand Junction, Colorado and they had four children together. Cindy, Butch, Phillip and Patricia. They later divorced.
In 1976 Gene married Arlene Humphrey and was happily married for 40 years.
Gene enjoyed listening and playing music, hunting and camping. Gene will be greatly missed by those who loved him but we are so happy to have had him for all of those years. He is now in the arms of Jesus and those who have gone before him. He will be reunited with his wife, Arlene Clark, who passed away in 2016. He will also be reunited with his parents and two brothers Donald and Jack.
Gene is survived by his daughter Cindy Clark; son “Butch” (Becky) Clark; son Phillip (Kandi) Clark; daughter Patricia Robinson Clark; brother James Clark; sister Evelyn “Honey” Cookston; six grandchildren, and 4 great-grandchildren
We wish to express our gratitude and appreciation to HopeWest Hospice Care Center for the care and compassion they gave to our father. Thank you to those who have extended expressions of sympathy and offer of assistance during our time of mourning.
We express our love and thanks to you for attending the services for our beloved Gene. Our thanks to Crippin Funeral Home.
The funeral service will be held Saturday, May 12, at 1:00 p.m., at the Crippin Funeral Home Chapel 802 E. Main St. Montrose, Colorado. Gene will be laid to rest at the Olathe Cemetery with the ashes of his beloved wife. Crippin Funeral Home & Crematory in Montrose is assisting the family.