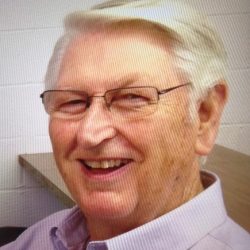 Everyone who loved Floyd is invited to partake in a celebration of life on Saturday, November 9, 2019 at 2:00 PM at Crippin Funeral Home, 802 East Main Street, Montrose, Colorado, officiated by Pastor Tod Truitt. In lieu of flowers, donations in Floyd’s honor can be made online at lifechurchmontrose.org or via mail to Life Church, 16367 South Townsend Avenue #8, Montrose, Colorado 81401.

Our beloved husband, brother, father, grandfather, and friend, Floyd Allen McGuire, you will be missed every day.

Floyd was born to parents Ralph and Lela McGuire on September 4, 1940 in Shattuck, Oklahoma. He was the second child of three; with older brother Harold and younger sister Carol. Floyd worked in the family’s cattle and ranch business throughout the first 35 years of his life.

In 1957, while in high school, Floyd met the love of his life, Esther Lee Richardson. They dated but it was not until Floyd went off to Oklahoma State University to earn his bachelor’s degree in animal husbandry, that they became serious. Esther had written a list of everything she wanted in a husband and she eventually realized that Floyd embodied every attribute on her list. Ignoring the standard etiquette of the time, Esther called Floyd’s fraternity house in 1959 and they started dating seriously as soon as Floyd returned home for Christmas that year.

Floyd and Esther were married on July 24, 1960 and throughout the next 59 years the pair built a beautiful family, raising three sons: Mark Allen, Michael Eldon, and Joseph Floyd.

After leaving the family business in Oklahoma in 1975, the family moved to Waco, Texas, where Floyd began a successful career in the insurance business. Floyd worked incredibly hard to build a comfortable life and he never lost sight of what was most dear to him–his family and his love of Christ. He and Esther were privileged to travel the world together from Russia and China, to Colorado and California.

Floyd loved the mountains of Colorado more than any other place. As their sons grew up and built families of their own, Floyd always knew that he and Esther would someday retire in Colorado. They relocated to Montrose, Colorado in 2005 where they designed a beautiful home together. The two quickly established themselves within a loving community of neighbors, friends, and fellow church members at Life Church.

Floyd and Esther spent many of their days visiting family in Colorado, Texas, and California. In July 2010, the couple celebrated their 50th wedding anniversary alongside their five grandchildren, three sons, and three daughter in-laws at a ranch in Colorado. More recently, in the summer of 2019, Floyd and Esther attended the wedding of their eldest grandson in Dallas, Texas. Celebrations like these were the hallmark of Floyd and Esther’s life together.

All those who met Floyd felt the love and peace of the Lord Jesus Christ. Floyd and Esther prayed daily for each and every one of their loved ones by name and delighted in scripture. Floyd and Esther spent countless mornings reading and discussing passages in the Bible. Floyd had a lifelong thirst for learning and was particularly interested in understanding the Word, as well as healing and many medicinal subjects.

Floyd passed away peacefully on October 29, 2019. His wife laid next to him reading Psalms from her Bible, surrounded by their loving sons.

Everyone who loved Floyd is invited to partake in a celebration of life on Saturday, November 9, 2019 at 2:00 PM at Crippin Funeral Home, 802 East Main Street, Montrose, Colorado, officiated by Pastor Tod Truitt. In lieu of flowers, donations in Floyd’s honor can be made online at lifechurchmontrose.org or via mail to Life Church, 16367 South Townsend Avenue #8, Montrose, Colorado 81401.