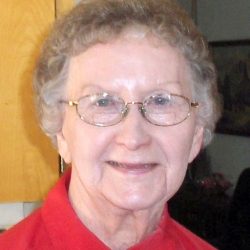 Born Eula Faye Martin October 26, 1921 in Custer City, Oklahoma, the second of four children of Fred and Hazel Martin.  She had a tough childhood in difficult times spent partly in Oklahoma, partly in Colorado.

She was married to D.R. “Bill” Fisher in 1938 in Oklahoma, and gave birth to their son, Ron, in 1942. When Bill was called to Service in the Armed Forces, Faye and Ron came to Montrose to be with the grandparents.

Not long after, Bill joined his family having been discharged when the military decided his extreme hearing loss prevented his service. Taking up permanent residence on North First Street away from the dust and disillusion of Oklahoma, Montrose became their paradise. They built a good life “minding their own business.”  Bill was a fine mechanic and Faye was a fine keeper of the house.

In the early fifties, Faye and Bill partnered with Jean and Jim Richards (Faye’s younger sister and her husband) to open Bill & Jim’s Auto Clinic, and later added the Studebaker Auto Agency, and later still, a new shop on Highway 50 East.

In 1956 Faye and family moved over to East Main Street where she and Bill lived out their life together.  In the 80’s, Faye enjoyed clerking for Conrad’s Clothing store, expanding everyone’s wardrobe, and buying a trailer for camping. Retirement years saw Faye and Bill camping and fishing, especially “up on the Cimarron” at Roadcap’s Sky Ranch.

After Bill died in 2005, Faye vowed to “stay in her house and only leave it feet first.”

Amazingly, with help from her family and friends and neighbors, she recovered from several hospitalizations, remaining in her home and continuing to “take the Senior Van to shop,” until 2012.  As Faye’s memory failed, she was assisted by ‘Touch of Care’ daily until she fell in her bathroom and damaged several vertebrae.  So, sadly, in 2014 her vow was curtailed.

Faye requested no services because “all her old friends who could attend are already in the cemetery.”