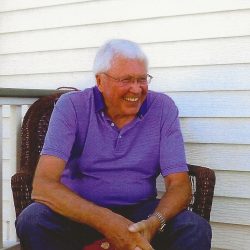 Ethan’s family moved to Montrose, CO, in 1937, where Charlie bought a lodge in Ouray and used the building to build the Black Canyon Motel in Montrose, which was originally named “Annis Camp.” Ethan attended Montrose schools through the 8th Grade.

In 1946, the family moved to Paonia, CO, where Ethan graduated from high school with honors in 1949, having played clarinet in the high school band and lettering in football and basketball. He attended Mesa College in Grand Junction, and graduated with an Associate in Science Degree in 1951.  He attended the University of Colorado-Boulder Pharmacy School, graduating with a Master in Science in Pharmacy in 1954.  He worked for 54 years as a pharmacist, having run drug stores and being on pharmacy staff in Colorado and Utah. His work was interrupted by a two-year stint in the Army, which included an assignment in Iceland, where he served in the medical lab and pharmacy.

Ethan married Caroline (Sigafus) Roller in 2005 and they enjoyed living together in their Montrose home that was built specifically for Ethan by his son Steve, a builder and developer.

Ethan and Caroline rode a touring motorcycle and enjoyed many road trips together. He was a member of Chapter Q, Gold Wing Road Riders Association. He was always there and he loved to ride. He was also a member of the National Rifle Association, a Grand Junction Life Member Elk, and a faithful member of the Church of Jesus Christ of Latter Day Saints.

He is predeceased by his mother, father, sister, and long-time companion, Ann McElgunn. He is survived by wife, Caroline, former wife Ruth, sons Mark (Lynn), and Steve (Lori), and two granddaughters: Emily and Abbey. Ethan leaves behind many friends and memories.

A graveside service will be held at Cedar Cemetery, Montrose, CO, at 11 a.m. on Saturday,
June 27, 2020. Crippin Funeral Home is assisting the family with arrangements.