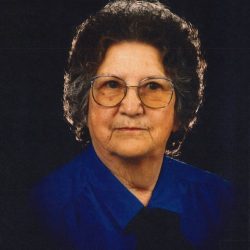 Vigil and Rosary will be held at Crippin Funeral Home in Montrose, Co on Wednesday October 30, 2019 at 6:00 PM

Services will be at St. Mary’s Catholic Church in Montrose, Co on Thursday October 31, 2019 at 11:00 AM Internment to follow in Hotchkiss, Co.

Born March 15, 1923 in La Madera, New Mexico where she lived until the age of one when her family moved to Colorado. At the age of 9 they moved to Hotchkiss, Colorado where she made her home. Mary met the love of her life Ben Tafoya when she was just 15 years old, however they didn’t start to date until she was 20 and she later married Ben at the age of 23. Ben and Mary celebrated 29 blissful years together side by side until his passing. Mary worked at the age of 9 in the Beet and potato fields with her dad. She attended school when she was 12 for 1 year only. She taught herself how to read and write from comic books. She later worked for a Dr. Office, The Paonia Hospital, cleaning houses, and eventually found her true calling as an amazing cook. This was one of her true passions in life. If you ever had her pies you know. Mary enjoyed Crocheting, quilting, sewing, taking care of her prize roses, reading books her sister Elsie would tell her about, But above all taking care of her family. Mary Spent many years caring for her Grandchildren and Great Grand Children. Mary welcomed anyone into her home and there would always be a home cooked meal prepared. You could always count on green chili and tortillas. Mary was a faithful devote Catholic woman who attended St. Mary’s Catholic Church in Montrose until she was unable, but she still received the Eucharist weekly at home. Everyone that met Mary loved her and she left lasting impressions and memories. Mary’s family was by her side as she joined her heavenly Father on October 24, 2019. She was preceded in death by her parents Frank and Elesia Vigil, her one and only love Ben Tafoya, her sisters Jennie, Rose, and Elsie, her brothers, Ernie and Frank, her Grandsons Daniel Tafoya and Ron Dalton Jr. She is survived by her children Ralph (Dixie) Tafoya, Cathy (Jody) Lipsey, her Brothers Henry Vigil and Felix Vigil, her grandchildren Tami, Pat (Julie), David, Bobby (Ashley), Amanda (Andrew) and Daniel, her Great Grandchildren Marlana (Alex), Desiree (Mathew), Taylor, Ben, Ryan. Andrante, Leilani, Darrius, Aariana, Anthony, Benita, Alexander, and Kable, her Great Great Grandchildren Tydus, Edison, Brookelynn, Mackenzie, and Nixon as well as many nieces and nephew. Mary had many honorary children, grand children, God children and family in her life.

Vigil and Rosary will be held at Crippin Funeral Home in Montrose, Co on Wednesday October 30, 2019 at 6:00 PM

Services will be at St. Mary’s Catholic Church in Montrose, Co on Thursday October 31, 2019 at 11:00 AM Internment to follow in Hotchkiss, Co.