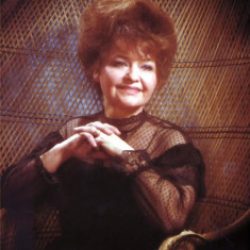 A vigil will be held on Monday evening, April 10, 2017 at 6:00 p.m. followed by a rosary. The Funeral Mass is scheduled for Tuesday morning, April 11, 2017 at 10:00a.m. Rite of Committal will follow the mass at Cedar Cemetery, East of Montrose. Arrangements are under the care of Crippin Funeral Home & Crematory in Montrose.

Elaine Katherine DeJulio of Montrose, CO passed away on Thursday April 6th 2017 at Montrose Memorial Hospital surrounded by her loved ones.

Elaine was born in Grand Junction, CO to Hugo and Catherine Peterson on June 22nd 1936. She studied to be a radiology technologist at St. Mary’s Catholic Hospital in Grand Junction, CO and worked under the direction of Dr. Basinger in the X-Ray Department. In 1968 Elaine and husband Donald DeJulio moved to Montrose, CO and purchased Chipeta Café. For 20 years Elaine and Donald were proprietors in the restaurant and bar industry. In 1990 Elaine became the Deputy Director of the Montrose Pavilion and retired after 20 years in 2010. She was a philanthropist and active civic member. She was recognized and admired by many in the Montrose community.

Elaine was preceded in death by her parents Hugo and Catherine Peterson, older sister Lorraine Terrell and father and mother in law James and Josephine DeJulio.