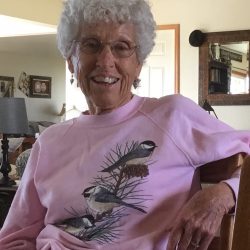 A Memorial service to celebrate Donna’s life and rejoice in her being free from pain will be held at the Circle 3 Cowboy Fellowship 62885 LaSalle Road Tuesday, October 15, 2019 at 6:00pm.

In lieu of flowers, please make donations in Donna’s name to Hope West.

The sweetest, kindest wife, mom, grandmother and great-grandmother left this earth on October 8, 2019 to be reunited in heaven with the Love of her life, Larry Wiltse.

Donna was born in Walseth, North Dakota on October 16, 1938. She was the eleventh of twelve children of Norris Issac Grilley and Lillian Maude Ladd Grilley.  She spent her childhood and received her education in Deering, ND.  She graduated from Deering High, class of 1957. Larry Wiltse graduated from Deering High class of 1958.  They were married June 22, 1960.  Their first home was a 30’ trailer house in Ft. Thompson, South Dakota.  Larry worked as a carpenter building the Oahe Dam and Donna was a homemaker and mother to their first two daughters, Sherry Lynn and Pamela Mae.  In the spring of 1964 they moved to Montrose, Colorado where two more daughters joined the family, Brenda Kay and Cynthia Marie.  She had many talents including: milking cows, churning butter, gardening, and canning and freezing the produce from her garden. She was an awesome cook and baked bread, cinnamon rolls, cookies, pies, bread pudding, donuts, lefse and homemade pancakes with cream and sugar. She enjoyed many craft including, crocheting, embroidery, macramé, tri chem painting, and putting together puzzles. Of course, she helped Larry with his many project, raising rabbits, hogs, cattle and chickens.  The chickens we dressed ourselves, this was not one of her favorite jobs! When all of the girls were in school, she worked in the kitchens at Oak Grove Elementary and Centennial Jr. High cooking lunch for the students. When Larry started his own construction business in the 1990’s of course she was right there to help him, insulating, painting, staining and anything else she could do to make his work easier. They spent several winters as snowbirds taking their motor home to Arizona or Texas.  She was a wonderful grandmother, caring for her grandchildren and great-grandchildren.

A special thanks to the amazing nurses and volunteers of Hope West Hospice:  Holly, Jeana, Felicia, Dee, Annie, Alice, Melissa, Erica, Deb, and Dr. Chaffee.  Thank you to Dr. Bryce Lokey, Jana Faragher and Merriam for their years of care.

Thank you to the residents of the memory care of Montage Creek.  They all have hearts of gold and are amazing and compassionate people that show such genuine concern for one another.  It makes us realize that despite a disease that takes away our memories, we don’t forget how to be caring human beings. A lesson we should all learn from.

In lieu of flowers, please make donations in Donna’s name to Hope West.

A Memorial service to celebrate Donna’s life and rejoice in her being free from pain will be held at the Circle 3 Cowboy Fellowship 62885 LaSalle Road Tuesday, October 15, 2019 at 6:00pm.