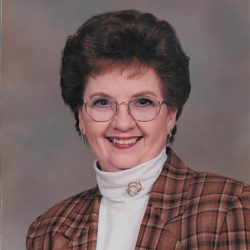 Donna was devoted to her church and the friends she knew from the town.

Donna Lou Nispel (Belders), 86, of Montrose passed away on Monday, March 30th at Valley Manor Care Center.  She passed away peacefully in her sleep.

Surviving is a daughter Kathleen Muir of Orange County, California and her husband Jerrie and son Alexander, daughter-in-law Nancy Nispel, grandchildren by her son Michael Nispel are: Thomas, Jennifer, Rachael, and Samantha.

She was preceded in death by her parents, her husband, her sister Cheryl Mooers, and her son, Michael Nispel.

A Catholic and member of St. Mary’s Catholic Church in Montrose, Donna was devoted to her church and the friends she knew from the town.  Donna was raised and educated in Hastings, NE and attended Kearney State College her freshman year.  She met her future husband, Don, in Hastings and together they build an architectural business and raised a family.

Donna’s passion in life was music and enjoyed singing and was the choir director for her church for several years in Hastings.  She moved to Montrose after her husband’s passing in 2004 and enjoyed the scenery and mountains.

A Vigil/Rosary is scheduled for Tuesday, April 20th, 2021 at 5:30-6:30p.m. at Crippin Funeral Home. A Memorial Mass is scheduled for Wednesday, April 21st, 2021 at 10:00 a.m. at St. Mary Catholic Church with a reception following. In lieu of flowers, please donate to the Montrose PACE program at: Senior CommUnity Care/PACE 2377 Robins Way Montrose, CO.