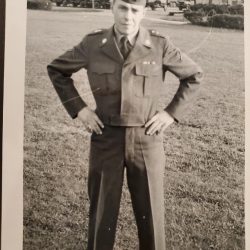 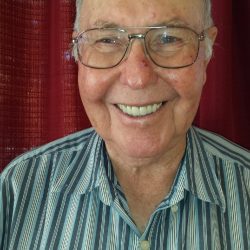 Due to current gathering restrictions a visitation for family and close friends is scheduled for Friday October 30th from 4-6 pm at Crippin Funeral Home and a private family service is scheduled.  Interment will take place at Grand View Cemetery.

Donald Warren Hopping was born on October 16,1932, to Webb and Josephine (Jackson) Hopping in Montrose, Colorado.  He went to school In the Montrose and Olathe areas, and graduated from Olathe High School in 1951.

Donald was drafted into the United States Army at the age of 19.  He was trained at Ft Ord, California. Then stationed in Munich, Germany in the Occupation Forces. Donald was a Field Artillery Crewman.  He also had training at the SEVENTH ARMY NCO ACADAMY in Munich, Germany in 1955, and earned his Sergeant stripes on October 20, 1955. As a Sergeant he trained other soldiers. Donald was awarded the NATIONAL DEFENSE SERVICE METAL, and the ARMY OCCUPATION MEDAL (Germany).  Donald was discharged with HONORS. He was then transferred to the United Stated Army Reserves from August 1956 through June 1961.  He was very proud to serve his country and shared many stories of his experiences with his family, friends and caregivers.  His length of service was 3 years, 2 months and 5 days.

Donald met his lifelong love, Elsie Faye Abrahamson in Montrose, Colorado and was married on December 19, 1958. They bought a farm in Olathe and started their lives together. They would have celebrated 62 years together.  They had 3 daughters, Judy, Barbara, and Charlene. Charlene passed away as an infant.

Donald had a successful farming/ranching career raising sugar beets, corn, beans, onions, hay, and barley.  He raised cows, pigs, horses, and even had a donkey.  He added a career with Russell Stover Candies and worked thirty years plus, long past his retirement years.   He and Elsie sold their farm of 56 years and moved from Olathe to Montrose in 2014.  They made many new memories in their new home.

He was preceded in death by his parents Webb & Josephine Hopping, Brothers Francis & Joe Hopping and sister Grace, and an infant daughter Charlene Kaye.

Due to current gathering restrictions a visitation for family and close friends is scheduled for Friday October 30th from 4-6 pm at Crippin Funeral Home and a private family service is scheduled.  Interment will take place at Grand View Cemetery.