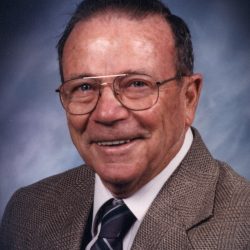 Service to be held at First Presbyterian Church of Montrose, January 3 at 11AM.  Should friends desire, the family suggests sending memorial contributions to the Honor Flight Network, an organization that honors veterans of WW II.

Don was born Feb. 26, 1929 to Herbert Spencer and Susan Mary (Shapel) Funston in Iola, Kansas.  At the age of seventeen he left high school and enlisted in the US Navy joining three other brothers already serving their country.  Following his discharge from the armed services in 1948 he attained work with the Bureau of Reclamation at Grand Coulee Dam in Washington State.  In 1951 he was recalled to service during the Korean Conflict and served an additional two- and one-half years, being discharged in 1953.  He returned to work at Grand Coulee Dam and it was there he met Maureen Ranger.  They were married June 2, 1956 and resided there until he was transferred in 1962 to the Molina Powerplants near Collbran Colorado.  In 1965, he was then transferred to the newly completed Power Operations Center at Montrose, Colorado and worked there as a Power System Dispatcher and Power Operations Specialist until his retirement in 1987. In retirement, he made numerous short-term mission trips to Mexico and North Carolina through the Presbyterian Church he attended.  On one such trip to Romania, he suffered a severe heart attack and was left hospitalized in Budapest Hungary for 5 days before returning home. He and wife Maureen traveled to numerous areas of the world.  He enjoyed annual fishing trips to Idaho, golfing with friends, and most of all, his family.