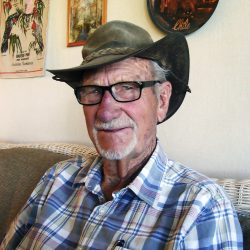 Memorial contributions may be made to All the King’s Horses Children’s Ranch, 543 S. Grapevine Loop, Benson, AZ 85602.

A memorial service will be held at 10 a.m., Monday, Sept. 16 at Christ’s Church of the Valley in Montrose.

He was born July 5, 1928, to Callie A. and Ruth (Wagnon) Zentmeyer in Los Angeles, Calif. Immediately following graduation from Van Nuys High School he served 18 months in the United States Army. He then earned a college business degree.

Don met Suzanne B. Kromer through the Hochgebirge Ski Club. They married October 27, 1956, in Santa Barbara, Calif., and celebrated nearly 63 years of marriage.

Don grounded his life’s goals and pursuits in his belief in the God of the Bible. He was a lifelong follower of Jesus Christ, which guided all his decisions. He and Sue moved their family to Montrose in 1967, where Don established partnerships in several businesses and property developments, including the property on which Montrose Pavilion sits. He was proud of the Montrose community, supporting the Chamber of Commerce and serving through memberships in Rotary and Lions clubs and Elks Lodge 1053.

Though his main occupation was as insurance agent, his driving passion was his faith and his family. While his five sons were growing up, he led a 4-H tractor club, taught them to both snow and water ski, and attended their many activities. He was a deacon and an elder of Montrose Christian Church, and later attended The Journey Church and Christ’s Church of the Valley.

He was rarely idle. His entire life was a combination of leading his family, working in the office, meeting with businessmen, serving his church family, maintaining the family farm, as well as fitting in skiing, fishing and golfing. If he did sit quietly, it was almost always with a pencil in hand and a yellow legal pad on which he made intricate projections and plans.

Don and Sue took seriously Jesus’ words to take the good news of eternal life to the world. They traveled to Chili, Argentina, Brazil, Dominican Republic, Jamaica, Mexico and Red Mesa in the Four Corners area to create promotional videos of the work of various missionaries. They became actively involved in the work of All the King’s Horses Children’s Ranch in Benson, Ariz., in 2004.

He was preceded in death by a brother, Wayne.

Memorial contributions may be made to All the King’s Horses Children’s Ranch, 543 S. Grapevine Loop, Benson, AZ 85602.

A memorial service will be held at 10 a.m., Monday, Sept. 16 at Christ’s Church of the Valley in Montrose. Crippin Funeral Home is handling the arrangements.