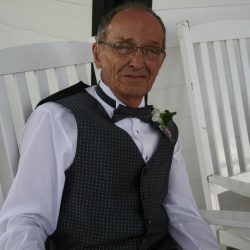 A memorial vigil will be held in Montrose at St. Mary’s Catholic Church on Friday, November 22nd at 2:00 pm. There will be a reception following the service at the Montrose Elk’s Club at 5:00 pm. All donations can be made to the Colorado Airlift Outreach Team at Coloradoairliftoutreach.org.

Donald Francis Cooling, Sr., age 85, of Montrose died on Sunday, November 17, 2019 at Montrose Memorial Hospital, surrounded by his loved ones. Don was born August 14, 1934 in Cerro Gordo County, Iowa to Francis and Aileen Cooling. He grew up on a farm with 6 siblings in Iowa. He was a charismatic and full of life young man; he worked on the family farm, played multiple sports, was crowned Homecoming King, and graduated from Rockford High School in 1952.

After high school he attended basic training at Sheppard Air Force Base in Texas and served in the United States Air Force for 21 years from 1952 through 1973. He was in the AC-119 Gunship Association with the 18th Special Ops Squadron.  During his time in the Air Force he completed two tours in Vietnam and was stationed in Guam, Japan, Thailand and throughout the U.S., retiring as a Senior Master Sergeant.

While Stationed at Langley Air Force Base in Hampton, VA, he met the love of his life Marilyn K. Holloway at a military dance and were married on base in 1955.  They were married for 64 years. They have 4 children, 13 grandchildren and 3 great grandchildren.

Once retired from the Air Force he briefly worked for the Post Office in Denbigh, VA.  Don and his family moved to Belmond, Iowa in 1975 to be closer to his family and started his HVAC career.  In 1979 Don and his family moved to Montrose, CO where he and his brother Bill established a small local business, Cooling’s Heating & Air Conditioning, which still remains in the Cooling family today. He retired from Cooling’s in March of 2018.

Don was involved with the Montrose Elks Club and the American Legion. He was also involved with many international volunteer organizations, working on seven Jimmy Carter trips with Habitat for Humanity, assisting in the construction of the El Buen Pastor Hospital in Mexico with the Colorado Airlift Outreach Team, and two trips to Louisiana for Hurricane Katrina Disaster Relief with Lowernine.org.

Don spent a lot of time with his friends and family and enjoyed many hobbies.  He was known by many as “Hoss”. He played softball, golf and enjoyed watching the Colorado Rockies. He loved his annual Canadian fishing trips with his sons and never missed a chance to attend his grandchildren’s sporting events. He loved to work with his hands, could fix anything, and spent many hours assisting his family in home improvement and DIY projects.

A memorial vigil will be held in Montrose at St. Mary’s Catholic Church on Friday, November 22nd at 2:00 pm. There will be a reception following the service at the Montrose Elk’s Club at 5:00 pm. All donations can be made to the Colorado Airlift Outreach Team at Coloradoairliftoutreach.org.