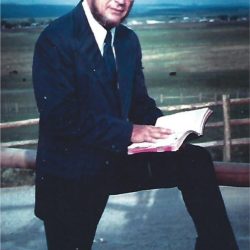 Donald Edward Woodstock, age 95, of Montrose, CO., went home to be with his Savior, the Lord Jesus Christ on May 4, 2018. Don was born to William and Lucy (Crouch) Woodstock in Lindsay, CA on Aug. 21, 1922.
Don received his education in Taylor, Nebraska and graduated from high school in California. During World War ll he served his country in the United States Army Air Corp in Italy and north Africa. Following his honorable discharge, Don was flying back with the others to the States, through a hurricane storm. It became a dangerous flight. Although he had no Christian background, he made a “foxhole” promise to God. Landing safely, Don made good on his promise. Don walked down the aisle on the following Sunday, to the song “Just As I Am” and accepted Jesus Christ as his Savior. In Long Beach, CA., Don met his future wife, Virginia Schenk of Los Angeles. The two moved to attend Bible Seminary in Ohio, where they were married, then they moved to Oklahoma, where he received his B.A. Deborah was born in 1952 and Stephen in 1956.
Don and Virginia served as missionaries to Brazil for a short time; for health reasons they had to return to the States then began over 50 years of ministry to churches in Oklahoma, Ohio, Iowa, California, Missouri and finally Colorado. In 1973, Don, Virginia, daughter Deb and husband Gary Hodges and son Steve moved to Norwood, Colorado to start a boys ranch and church. That decision led to the establishment of Norwood Christian Youth Ranch which operated for 20 years and the Norwood Christian Church which remains to this day. Don finally retired at age 83.
Don and Virginia moved to Montrose. The family was instrumental in the establishment of Christ’s Church of the Valley (located at the former Silver Jack Restaurant) in 2008. Don is survived by Virginia, his daughter, Deborah (Gary) Hodges of Montrose, son Steve (Robin) Woodstock of Montrose, granddaughter Allison (Chris) Fairchild of Montrose, granddaughter Rebecca (Chad) DeAngelo of Montrose. A Memorial Service will be held at Christ’s Church of the Valley Saturday, June 23rd @ 1:30 pm. The service will conclude at the church. Inurnment will be held at a later date in Cedar Cemetery, Montrose. Crippin Funeral Home & Crematory in Montrose is assisting the family.