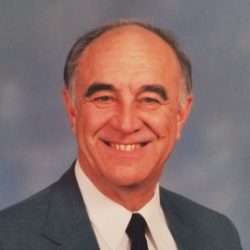 We know he is with the Lord, as he invited Jesus into his heart many years ago and Romans 10:9,10 promises, “That if we confess with our mouth that Jesus is Lord and believe in our hearts the God raised Him from the dead, we will be saved!”

He was a good protector and provider for his family, giving his wife many fantastic trips in the United States and the world, like the Grand Canyon, Montana, Rushmore, Florida and Oregon; many cruises and trips to the Mediterranean, Venice, Rome, Portugal, Spain, Israel, Ephesus, Alaska, Ontario, Niagara Falls, Isle of Capri, Barcelona, Paris, Madrid, London, Bermuda, Mexico and Bahamas.

He had a few patented inventions that were work- related therefore belonged to the companies for which he worked: Lockheed-Martin, Dravo and Johns Manville in the Denver area.  He was known as a “crackerjack” of an engineer. He was a rocket scientist on the Titan Missile.

On he and his wife’s 61st wedding anniversary, we will be celebrating his life at Rosemont Baptist Church, at 3:30 p.m. on Friday March 31. A dinner for family and friends will follow the service.