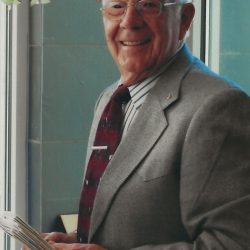 A Funeral service will be held Wednesday, December 29, 2021 at 11 am at Crippin Funeral Home.  A graveside service with Military Honors will follow the funeral at Cedar Cemetery east of Montrose.

Delmar Lawrence Leger, was born July 1, 1929 to Charles N. and Stanley Mabel (Reece) Leger in Franklin, Ohio.  He spent his childhood in Denver, Colorado and graduated from West Denver High School he then furthered his education at Texas Tech University in Lubbock Tx.  On March 12, 1954 at the age of 21 he enlisted in the United States Air Force and entered at the Amarillo Airforce Base in Amarillo, TX where he was an A&E Mechanic Instructor.  He was honorably discharged March 13, 1954.  Del married his wife Louise on May 16, 1959 in Lubbock Tx.  They moved from Texas to Fort Collins then to Montrose which was home for the past 50 years.   Del started his real estate career in 1971 and was broker/owner of Real Estate Exchange until his retirement.    He was co-founder and co-pastor of the Christian Church of God in Grand Junction and was a member of the Montrose Visual Arts Guild.  Being a man of exceptionally strong faith, one of his greatest passions was sharing his love of God with others, he wrote many booklets for the church which have been distributed as far away as South Africa.   Del’s many other interests included painting, music, woodworking, gardening, reading, writing and studying the bible.  He loved spending time with family and friends and was always ready for a good game of Uno.

A Funeral service will be held Wednesday, December 29, 2021 at 11 am at Crippin Funeral Home.  A graveside service with Military Honors will follow the funeral at Cedar Cemetery east of Montrose.