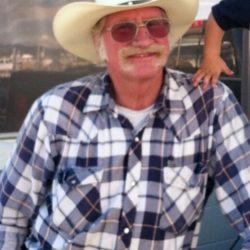 A Memorial service to honor and celebrate his life will be held 11:00 AM on Wednesday May 8, 2019 at the Paradox Community Center. With Scott Bird Officiating.

Long time Paradox resident David Williams died at his home on Thursday May 2, 2019. He was 65 years old.

A Memorial service to honor and celebrate his life will be held 11:00 AM on Wednesday May 8, 2019 at the Paradox Community Center. With Scott Bird Officiating.

Mr. Williams was a member of the Seventh Day Adventist Church in Nucla. He helped serve his community by being on the volunteer fire department in Paradox. Being outdoors was a big part of his life as well, camping, hunting, fishing, gardening, playing his guitar and singing around the camp fire. He enjoyed cooking for his kids and grandkids, because “If there’s one thing I can’t stand it’s somebody who won’t eat.” His wit and wisdom were often shared with such one – liners as “Horse-feathers” and “Adios for every-ting”.

Those grateful to have shared in his life include his wife, Jeanne Williams, his son; James (Deana Williams of Placerville, CO, his daughters, Cheri (Chris) Bichon of Glenwood Springs, CO, Christina Bird of Nucla, CO, Step-daughter Shiloh Dion of Clifton, his sister; Judy Cardona of Sacremento, CA. He is further survived by his grandchildren; Scott, Alene, Michael, and Angel Bird, Jordan and Baylee Williams, Lexi and Griffin Bichon, step-grandchildren; Arolina Earle and Shylo Graves. And many nieces and nephews.

Memorial Contributions are welcomed by the Paradox Fire Department.

Arrangements are under the care and direction of Crippin Funeral Home, please see the internet obituary and sign the on line guest book at www.crippinfuneralhome.com.