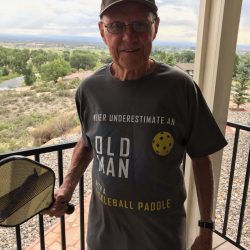 David Allan Slaker, age 88, a resident of Montrose, Colorado for many years, passed away on February 3, 2021 due to COVID-19 complications.  He is survived by his wife Gloria Jean Slaker; his son Jeffrey Slaker and wife Lisa of Headland, AL; daughter Jill (Slaker) McGee and her husband Mike of Johnstown, CO; five grandchildren, and three great grandsons. Dave was born in Cleveland, Ohio on July 5, 1932. Most of his young childhood and twenties were spent in Detroit, Michigan. After high school graduation, Dave attended Eastern Michigan College. In November 1952, he was drafted into the Army and trained at Ft. Bliss, Texas. In March 1953, Dave was sent to Camp Desert Rock, Nevada where he participated in an Atomic Bomb testing. He and other soldiers witnessed the blast and then were forced to march into the blast site with no special protective equipment. These soldiers who were involuntarily exposed to harmful ionizing radiation became known “Atomic Veterans”. In June 1953, Dave was stationed in Tokyo, Japan where he served 13 months in a Topographical Company. After his honorable discharge from the military, Dave enrolled in classes at Wayne State University in Detroit, Michigan.  In 1958, Dave ventured out west to the Golden State of California.  In the little seaside town of Avalon on Catalina Island, he found truth in the old song, “I Found My Love in Avalon beside the Sea”.  He met his bride-to-be, Gloria Jean Brown on Labor Day weekend in 1959. He and Gloria Jean were married April 2, 1960 at the 1st Presbyterian Church in Culver City, California. That union lasted for 60+ years and was blessed with the birth of a son and daughter. In the early days of their marriage, Dave and Gloria both worked at Vandenberg Air Force Base in Lompoc, California. Dave did inspection work at the Atlas Missile Site and witnessed several of the missile launches. He later completed the requirements for his Bachelor of Arts degree at the University of California, Northridge. He then went on to teach with the Los Angeles School District for 10 years. The family relocated to Montrose, Colorado in October of 1977. Starting off as a substitute teacher for the RE1-J School District, Dave was then hired as a full-time teacher in September 1978.  He taught at both Olathe and Oak Grove Elementary Schools and retired after 14 years of service. He spent much of his retirement years traveling and staying active in sports. He loved to travel to the Indian Wells Tennis Garden in Southern California to watch the annual two week world class tournament. His tennis passion evolved into a new interest, playing pickleball.  He became an avid pickleball player and exercised regularly at local health clubs and most recently at the new Montrose Recreation Center. He and Gloria also enjoyed travels across the United States, Europe, Canada, Costa Rica, and other places both near and far. He loved to talk and joke with the many people he met during the course of his 43 years in Montrose. He will be deeply missed by his family and friends.

A family memorial service will be scheduled at a later date.

THE MEMORY OF A GOOD PERSON IS A BLESSING.  PROVERBS 10:7