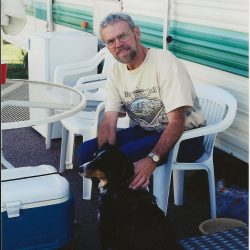 David Franklin Dougherty was born March 6, 1946, in Cedar Rapids Iowa. He passed away March 30 2021 at his brothers home in Montrose. David’s family moved to Denver in 1956, where he lived until retirement in 2002 then to Montrose. Dave was an avid outdoorsman for most of his life, hunting, fishing, snow and water skiing. He enjoyed NASCAR races and classic muscle cars. Anyone who knew Dave would tell you he was always there to lend a hand. Dave always had a dog, mostly Border Collies and he really enjoyed going to the sheepdog trials especially in Meeker, CO. Dave was a lifelong auto and diesel mechanic he spent the bulk of his career working at Colorado Kenworth for over 30 years. He was preceded in death by both parents and older brother Gary. Dave was cremated and will join them in Denver. Dave is survived by his younger brother Bruce, nephew David W. (Melissa) Dougherty, niece Patricia Dougherty, Great Nephew Bruce R. (Ally) Dougherty and great niece Karen Williams. There will be no service in Montrose. If you wish to you may donate to Hopewest Hospice in Dave’s honor.