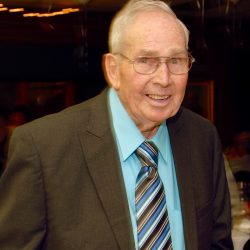 Relatives and friends are invited to his Funeral Mass, 10:00 a.m. on August 2nd at St. Daniel’s Catholic Church, Ouray, CO. In lieu of flowers, the family requests donations made in Dave’s name to HopeWest Hospice in Montrose.

David Andrews Calhoon, 1924-2019, was born in the mining town of Victor, CO on November 16, 1924. He died peacefully on July 14, 2019. Growing up in Victor Dave enjoyed running around with his three brothers and friends, fishing and hunting rabbits on Big Bull Mountain. Dave learned how to swim in the compressor cooling tank at the Ajax Mine. In high school he worked the graveyard shift at the Cameron Mine and was a delivery boy for the Rocky Mountain News. In 1943, less than a week after graduating high school, Dave and his older brother Robert enlisted in the US Navy and served in World War II. After boot camp, then diesel and motor machinist school, in 1944 Dave was shipped out on a troop transport ship to the Philippines where he served on USS LST-668 in the Pacific Theatre. In May of 1946 Petty Officer 2nd   Class Dave Calhoon mustered out of the Navy following a 64-day trip from Manila to San Francisco Harbor.

After the War, Dave returned to Victor and worked at the Cresson Mine for a short time, then moved to Ouray to work at the Idarado Mine where he lived in the bunk house. Using the GI Bill, Dave left the Idarado for Fort Lewis College to take classes in geology, surveying and engineering for a year. After returning to Ouray, Dave met and married his wife Josie Ficco on April 6, 1950.

Dave loved hunting with his close friends and family. With the first hint of fall each year, Dave had his backpack ready and hunting camp stocked. The only Colorado hunting seasons he ever missed were during the three years he served in WWII. Dave never gave up on mining in Ouray County. He spent many years prospecting in the San Juan mountains and, during the last few years of life, researching Ouray mining records, geologic maps and reports, forever in search of a good prospect.

Above all, Dave loved his family and friends. The Fourth of July was Dave’s favorite holiday and he celebrated this year at his

home in Ouray, surrounded by people he loved. Dave enjoyed and lived life to the fullest until the very end.

Dave, Dad, Grandpa, Uncle Dave touched many lives with his kindness and love. He will be greatly missed. Relatives and friends are invited to his Funeral Mass, 10:00 a.m. on August 2nd at St. Daniel’s Catholic Church, Ouray, CO. In lieu of flowers, the family requests donations made in Dave’s name to HopeWest Hospice in Montrose.