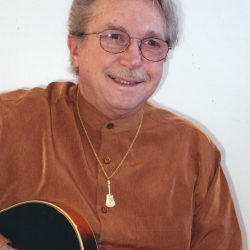 A memorial service will be held on Friday, August 30 at 10am at Crippin Funeral Home, 802 East Main St, Montrose.

Dave was born to Aaron and Stevie (Eakins) Nuftul in Muskogee, Oklahoma, where he spent his childhood.  After serving in the US Army, he went on the road as a professional musician.  Music was his passion and he played in many bands in many states over the years, most recently the Thin Air Band.  He also gave music lessons and shared his music knowledge whenever he could.

Dave entered the building trades in the Chicago area when he realized he needed a “real job” but stayed active in the music field.  He felt he received many breaks along the way and never passed up the opportunity to help someone who needed it.  Some of his last thoughts were to love each other, help when you can, and never hurt anyone on purpose.

Dave is survived by Kathy, his wife of 19 years, and their blended family of Scott Nuftul, Christine (Joe) Buerger, Mike Lewis, Jeff (Kim) Lewis, and Kim Vaca.  He will be missed by 9 loving grandchildren and 1 great grandson. Many friends and neighbors also mourn his loss.

A memorial service will be held on Friday, August 30 at 10am at Crippin Funeral Home, 802 East Main St, Montrose.