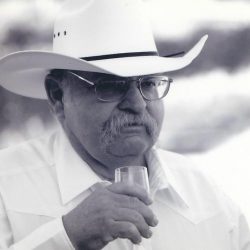 The service will be held at Montrose Christian Church on August 22, 2019 at 2:00pm. I lieu of flowers please consider making a memorial donation to the Montrose 4-H Foundation.

Darel was born on September 21, 1944 to Alfred and Louva Brown in Montrose, Colorado. He was an active member in FFA, played football, and was part of the 1963 State Championship Montrose High School wrestling team. He spent his summers in Nevada helping his older brother Wes, on the Blackstock Ranch. After graduating High school in 1963, Darel enrolled at Mesa State College where he earned his Civil Engineering degree. He was then employed with the Colorado Department of Transportation and worked there for 30 years until his retirement in June of 2000. On March 16, 1973, Darel married Jane Jensen and they were rarely apart in their 46 years of marriage. They had two sons, Cody and Dean. He loved to watch his sons play sports and any other activities they were involved in. Darel enjoyed taking his family to the National Western Stock Show in Denver and he loved 4-H. He was a 4-H leader for 10 years where he developed lifelong friendships and he remains a staple at several county fairs. He was a lifetime member of the Elks. His past times included hunting and fishing with his brothers and team roping with his family and friends. Darel was always the first to volunteer his time for any project but his favorite project included anything involving livestock. His most recent passion was spending time with his grandsons and taking them camping and fishing. Darel is survived by his wife, Jane Brown, his two sons, Cody and Dean Brown, two grandsons, Braxdon and Denton Brown, all of Olathe, Colorado, Brothers, Gale Brown and his wife Sue, Wayne Brown and his wife Bev of Montrose, Sisters, Theora Robinson and her husband Phil of Montrose, Lynne Dunn of Grand Junction, and Lorell Cotton and her husband Larry of Monte Vista, and numerous nieces and nephews. He is preceded in death by his brother Wes Brown and his sister Winafred Brown. The service will be held at Montrose Christian Church on August 22, 2019 at 2:00pm. I lieu of flowers please consider making a memorial donation to the Montrose 4-H Foundation.