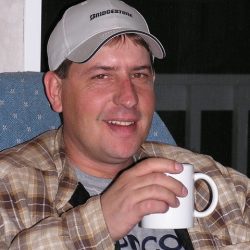 A Celebration of life will be held on the back patio of the Montrose Elks on Saturday, July 11, 2020 from 2-4.

People who wish to make a contribution in Dale’s name may do so at Dale Cox’s ALS fund at Alpine Bank. The money in this fund will now be used to help with Loveann and Patrick’s educational expenses.

On Monday, March 16, 2020 Dale Robert Cox, 45, loving husband, father of 2 children, son, brother, nephew, favorite uncle, son-in-law, brother-in-law and friend to all he met along the way, passed away at home with family by his side owing to complications of Amyotrophic Lateral Sclerosis (ALS) also known as Lou Gehrig’s Disease.

Dale was born on April 8, 1974 in Burlington, Colorado to Bob and Diane (Stolz) Cox. He was baptized as an infant at the Immanuel Lutheran Church north of Bethune, Colorado. He moved to Montrose with his family in 1980. He often returned to the Stolz family farm during the summers through his early teen years, not just to visit, but to work. Dale developed a sense of family and a work ethic that isn’t commonly found today and he honed his inherent orneriness during those farm visits. That orneriness became the topic of many family conversations and stories and became what we all cherished and loved about Dale.

He married the love of his life and best friend, Christine Nitzel Cox on June 26, 2008. They spent 24 and 1/2 years together. Christine knew the moment she met Dale when she was only fourteen years old that she was going to marry him someday. They built their relationship on learning from one another, mistakes, growth, trust, strength, honesty and a one of kind love for each other, or an ever-lasting love as they would say.

Together Dale and Christine raised two children that they are so proud of, Patrick Cox, 21 and Loveann Cox, 20. Dale fell in love with his children immediately and he loved them more than anything. Once the kids were born, they were the center of his world. Dale was a patient, nurturing, and doting father. He was a stay at home dad with Patrick for the first year of his life. Patrick and Loveann spent many hours at Standard Tire with Dale while they were growing up.

As the children grew, Christine enjoyed listening to Dale’s late-night conversation with them about current events and life lessons. He believed in letting the kids learn by trial and error, backed by his love and support. He was a proud and present dad…proud of first steps, first bike rides, every award ceremony, graduations, first concerts and more. His greatest desire for his kids was that they lived a happy life.

Dale had a long list of jobs and employers including Chuck Cordova, Bruce Kinion, Vurl’s Farm Supply and Standard Tire, and through these jobs he made some life-long friends. One of his hardest jobs and proudest accomplishments was building miles fence all over Colorado for Chuck Cordova. He especially loved working on fence on the Double RL Ranch on Dallas Divide.

Dale started his career with Standard Tire of Montrose in 1999. During the 20 years he worked there he became family with Tom and Kristy (Peters) Barrett and their children and their extended families at the Tire Dealer Warehouse (TDW) and the Gunnison Standard Tire.

In 2013 Dale took over the leadership of Standard Tire as the store manager. Dale made everyone’s day better with his positive work ethic and attitude. Coworkers and customers always knew that Dale was doing what was best for them. Dale mentored dozens of his fellow coworkers giving special attention to his son Patrick and his nephew Will.

Coworkers and customers were Dale’s family members away from home. He treated them all fair and with honest concern for their well-being. Dale developed a plethora of friends and acquaintances during his tenure at Standard Tire, not to mention all of the dogs he got to know over the years. Customers were not just customers to Dale. He made sure to get to know all of you on a personal level, knew all of you by name, asked about your family, your health, or whatever else your conversation ended on the last time you were in. He truly loved his job and each one of you.

After Dale was diagnosed with ALS, his never quit attitude became stronger and he was inspirational to everyone he came in contact with. His impact on coworkers, customers and suppliers is confirmed by the many who stopped by to check on him and just to have a person talk with him. Dale was a man of few words, all of his words were spoken with friendship, passion and truth. Those of us blessed to be a part of his life can reflect on his example and when times get tough can ask ourselves, “what would Dale do?”. Dale has many favorite sayings, some of which he will be remembered for are “Suck it up buttercup”, “It’s all good” and “It is what it is”. Sometimes we don’t know how to handle the negative in our life and Dale taught many how to turn a negative into a positive.

Although severely affected by ALS, Dale continued to perform duties at Standard Tire until days before his passing, He could not have done it without the loving support of his coworkers and family members, especially Tom Barrett, Patrick Cox, William Cox, Francisco “Frankie” Maldonado, Joe Scoggins, Tyler Scoggins, Kurt Boyd and all the other associates that supported Dale.

Music was a huge part of Dale’s life. He always looked forward to attending various concerts with his wife, family and friends. Dale loved the 4th of July and Halloween. 4th of July was his favorite holiday because he enjoyed seeing his family at the Coxes annual 4th of July party and because he loved setting off (sometimes illegal) fireworks. He always had a love affair with fire. His nearest and dearest would call him a pyromaniac.

When Dale was diagnosed with ALS, he established a bucket list and was able to fulfill several of his bucket items including a skydiving trip with the Cox family and a special trip with Christine to California to see the ocean and the Redwood Forest.

In addition to his wife and children, Dale is survived by his parents, Bob and Diane Cox, his brothers Pat Cox and Chuck (Lezlee) Cox, his nieces and nephews William, Sara, Paeten and Xander Cox, Brandon, Anne and Emslee Cox, Caralea Cox, Kendyl Cox, Hunter (Nitzel), Luke and baby P. Peters, Ty Nitzel, Mariah Martinez and family. Dale is also survived by many aunts, uncles and cousins that he loved unconditionally.

Christine would like to thank everyone who helped Dale through this journey with their love, support, kindness, donations, prayers, and time. It meant more to her than you will ever know. She considers you to be Dale’s angels.

Cremation has taken place and an open house celebration of life will be held on the back patio of the Montrose Elks on Saturday, July 11, 2020 from 2-4.

People who wish to make a contribution in Dale’s name may do so at Dale Cox’s ALS fund at Alpine Bank. The money in this fund will now be used to help with Loveann and Patrick’s educational expenses.