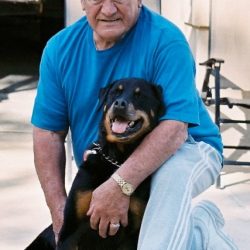 There will be a Funeral Mass on Saturday, May 19, 2018 at 10:00 a.m. at St. Daniel’s Catholic Church in Ouray, Colorado, with burial to follow at Cedar Hill Cemetery in Ouray.

Christopher P. Baca, age 76, went home to be with his Lord and Savior on Monday, May 7, 2018 at Montrose Memorial Hospital. Christopher was born June 25, 1941 to Amarante and Isadora (Casias) Baca in Durango, Colorado. Christopher grew up in Ouray, CO and graduated from Ouray High School and earned his bachelor’s degree in Fire Science. In June of 1959 Christopher had the honor of serving his country in the United States Marine Corps. In June of 1961 Christopher married the love of his life Anna Montano, the celebrated 56 years of marital bliss. Christopher worked for the North Las Vegas Fire Department for 28 years and earned the title of Battalion Chief. He loved running and was an expert outdoorsman and skier. Christopher was a part of Teamsters, the National Ski Patrol. He was a faithful attendant of St. Daniel’s Catholic Church in Ouray, Colorado.
Christopher is survived by his loving wife, Anna Baca of Montrose, CO; his son, Christopher M. Baca of Las Vegas, NV; his daughter, Cathryn E. Stokke of The Woodlands, TX; his brother, Harold Baca of Las Vegas, NV; three grandchildren, Brandten, Keaten and Rylan Stokke. Christopher is preceded in death by his parents Amarante and Isadora Baca; his daughter Celina Baca; and one brother George Baca.
There will be a Funeral Mass on Saturday, May 19, 2018 at 10:00 a.m. at St. Daniel’s Catholic Church in Ouray, Colorado, with burial to follow at Cedar Hill Cemetery in Ouray. Arrangements are under the care of Crippin Funeral Home and Crematory.