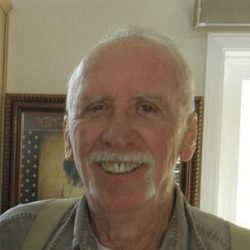 Charlie was born October 15, 1935 in Ponca, NE to David Franklin and Lavona Bernice  (Force) Russell
He passed away peacefully at home December  9, 2021

A memorial service will be held at 10:00 AM, Saturday, December 18, 2021 at Crippin Funeral Home.
*we respectfully ask everyone to wear a mask

Charlie was born in Ponca, NE and grew up farming in the heartland. Throughout his life, he loved working the earth in fields with his Farmall tractor, growing big, fantastic gardens and tending animals. You could have the best conversations with him about growing anything and the animals – he always had some – from chickens, pigs, cows and horses to the dogs that were wonderful companions.
Birthdays and Celebrations always included hand cranked, homemade ice cream and chocolate cake!

Charlie graduated from Allen High School. In 1955-56, he served his country in the Army.
Charlie married Darlene Korthouse in 1958. They had 4 children – Jeff, Brian, Lisa and Lori. They divorced in later years. Charlie lived in Nebraska until 1978 when he moved to Montrose, Colorado.

Charlie married Georgiana Rocha Ladage Russell on February 16, 1984. Son, Nick Ladage joined the family with Georgiana. Charlie and George were happily married until she passed away in November 2020.

Charlie created a legacy of caring and serving others in his life. This started with his family, continued in his work, and was woven throughout his life. He worked in many different capacities in the community of those with developmental disabilities. Through the years, Charlie and his wife were host home providers – providing a home for those with disabilities, supporting them in their lives and building independence. He worked in and led many programs over the years – sometimes leading large, multi-faceted programs, sometimes particular programs – like the Woodshop. He was always an advocate for those with disabilities.

He is survived by children Jeff (Sabine) Russell, Lisa (Tim) James, Lori Czuba and Nick (Bonnie) Ladage. His grandchildren include Heather Russell Gabel (great grandchildren Brenden, Halle and Brant), Jennie Czuba, Zac Czuba, Josh Ladage and Michaela Ladage.
He is also survived by many nieces and nephews (and greats), cousins and other extended family. We lovingly remember sharing family holidays and vacations together.

We’re all a little better for having had Charlie in our lives. He is loved by many and will always be greatly missed.