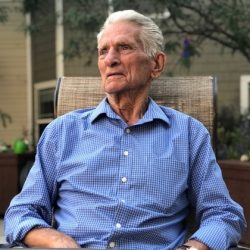 Service Date There will be a small family service at a later date.

There will be a small family service at a later date.

The family would like to thank Horizons Care Center in Eckert, CO., HopeWest Hospice

In true Cal style he proclaimed  “I have never been sick a day in my life” until the end.

Cal was born in Regina, Saskatchewan, Canada on October 19th 1930 to Ercel and Mary (Relic) Browning.  The family later settled in Masontown, PA. Cal enjoyed sports while growing up and excelled in football. He graduated from Masontown High School in 1948.  After graduation Cal worked in the coal mines in Pennsylvania, to the oil rigs in Utah and Aerodex in Florida. In 1971 he became a federal coal mine inspector for MSHA.  This led Cal, Marsha, Wes and Laura to relocate to Montrose, CO in 1978, Cody was born the next year.  Cal continued working for MSHA until his retirement.

Cal enjoyed the outdoors, especially being in the mountains. He spent countless weekends taking his family over mountain passes and teaching them about every mine and ghost town they came across.  Cal was a history buff and loved to read.  Long before the internet Cal was his kids walking encyclopedia for school reports.

Cal will be remembered for his hilarious, witty sense of humor, his hard work ethic, his generosity that knew no limits but mostly for how much he loved his kids and grandkids.  He was the grandad that always had a stick of gum, a $20 bill and a kiss on the check. Cals kids and grandkids brought him so much joy and truly lit his face with happiness.

Cal was diagnosed with dementia in 2011 but that did not stop him from living a full life surrounded by family and staying active with lots of walks.

Cal was proceeded in death by his beloved son Cody, his family finds joy and peace knowing their reunion was full of happiness and that our dad is fully healed.

He was also proceeded in death by his parents, brothers Ronald, Edward, Eldon and Robert and sister June.

There will be a small family service at a later date.

The family would like to thank Horizons Care Center in Eckert, CO., HopeWest Hospice, and Crippin Funeral Home.