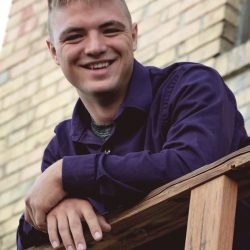 A funeral service to celebrate Brandon’s life will be officiated Saturday January 11th at 10:00 am at the Montrose Church of Jesus Christ of Latter-Day Saints, 1521 South Hillcrest Drive, Montrose, Colorado. Interment will follow at the Grand View Cemetery.

Memorial contributions can be made to the Brandon Butler Memorial Fund at any Alpine Bank.

It is with great sorrow and sadness that we announce the unexpected passing of our beloved son, grandson, brother, cousin, nephew, friend and teammate, Brandon Alan Butler. Brandon, age 18, passed away on Saturday evening, January 4th, 2020 at St. Mary’s Hospital in Grand Junction, surrounded by his friends and family.

Brandon was born in Montrose, Colorado on September 12th, 2001, to parents Stephen Butler and Marie Rice (Barnett). Brandon lived and attended school in Montrose until moving to Delta prior to starting the 2nd grade. Brandon was a senior at the Delta High School.

As Brandon grew into a young man he excelled as an athlete. He had the desire, dedication, passion, and God given talents it took to be great. His goal of paying for college with his ability to play football was materializing before his untimely death. Brandon’s ability and leadership helped propel the Panthers football team to the State Championship game this past fall. Brandon was recently named first-team all-conference and first team all-state for the 2019 season. He also loved to wrestle and was in the middle of a successful season competing for the Panthers.

Brandon was employed as a lifeguard at Bill Heddles Recreation Center in Delta. In his free time, he enjoyed camping, riding dirt bikes, target shooting, playing his piano, listening to music and spending time with his friends and family. He loved to dance. He also really enjoyed teaching and coaching younger students and athletes.

Most recently, Brandon’s life was all about sports and competing. However, he was so much more than that. He left his mark on so many people. Brandon had a strong faith and was active in the church serving his calling in the priesthood. He loved people. He always had a smile and it would change your day. He had a huge heart and loved helping others. He was a fighter. He strived to be the best and at the same time made everyone around him better.

Brandon was a bright light that shined far and wide. His infectious youthful spirit will forever be remembered and adored. Our hearts are broken as we try to understand. We will miss him deeply but will be forever grateful for the time we had with Brandon. He lives on through all the people he touched in his short 18 years of life. We love you Brandon.

Brandon also left behind his football and wrestling families along with the student body of Delta High School and a community that loved him very much.

A funeral service to celebrate Brandon’s life will be officiated Saturday January 11th at 10:00 am at the Montrose Church of Jesus Christ of Latter-Day Saints, 1521 South Hillcrest Drive, Montrose, Colorado. Interment will follow at the Grand View Cemetery.

Memorial contributions can be made to the Brandon Butler Memorial Fund at any Alpine Bank.