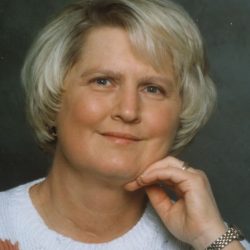 Due to covid, services will be held at a future date. Interment has taken place at Grand View Cemetery.

Bonnie Jean (Anderson) Hunter was born October 29, 1947 and passed away on October 29, 2020 on her birthday due to results of vascular dementia. She was born to Alvin H. Anderson and Viola M. (Ely) Anderson in Loma Linda, California. Bonnie was joyously greeted by her older sister Beth and grandparents Elmer and Betty Ely and Grandmother Lena Anderson in addition to her parents.

In 1975 Bonnie married the love of her life Daniel Hunter. Bonnie was forced to quit working as a dental assistant due to cervical neck injuries after which she developed her interest in crafts and could frequently be found hot glue gun in hand making items for family and friends.

Bonnie and Dan moved to Missouri in 1991 after Dan retired where they really enjoyed the slower paced country living.

They both enjoyed traveling and made several trips to Europe as well as St. Thomas where they made many friends. She also enjoyed spending time with her parents, sister, brother and nieces and nephew.

In March of 2007 Bonnie lost her husband to death and in January of 2017 Bonnie moved to Montrose, Colorado to be close to her sister and nieces. Due to disabilities she lived at Valley Manor Care Center where she was very active in all activities until her death.

Bonnie was preceded in death by her husband, Dan, her parents, Alvin and Viola Anderson, and grandparents, Elmer and Betty Ely and Lena (Al) Rider and Oscar Anderson.

Due to covid, services will be held at a future date. Interment has taken place at Grand View Cemetery with Crippin Funeral Home providing services.