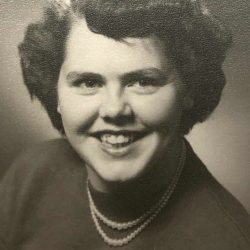 A Celebration of Life will be held October 19th at 2:00 p.m. at the ranch in Coventry at David and Terri Andrews, please bring a covered dish to share. If weather does not permit, an alternate location will be determined.

Betsy (Alexander) Davis was born on October 3, 1933 to Robert and Oda (Collins) Alexander. She was the youngest of seven children, the family spent the summers in Telluride and winters in Redvale running sheep. In 1934 they bought a ranch in Norwood and settled east of town in 1939. Betsy and all her siblings graduated from Norwood High School, after Betsy graduated in 1951 she attended college in Greeley for two years before marrying the love of her life Roy Davis on June 14, 1953.

Betsy and Roy settled into his family’s ranch in Coventry after they married and raised their three children, Donna (Steve) Cadwell, Terri (David) Andrews and Robert (Ann) Davis there. They raised sheep (for a short while) before moving their operation to cattle and horses. Horses were something Betsy and Roy were both passionate about. Betsy loved her life ranching, many days were spent with Roy and family cowboying on North Mountain, she spent any extra time she had building projects in her yard, watching football or baseball and reading. Betsy was a handyman, often doing small remodeling projects in her home herself.

Betsy always said her life with Roy was a true ADVENTURE!! And after his passing in 1997 she continued to ride in the summers helping on the ranch and her brother Kirk on his ranch. She also travelled frequently to see her sister in Nevada as well as Texas going to horse events and California to see friends and family. She also took one trip to Germany where she drove the autobahn in a fast car with her friend Linda.

Betsy truly loved all the generations of her family, having seven grandchildren and seven greats¬ grandchildren she was involved daily when she was home, most recently she stayed busy attending any activity her great-grandchildren were involved in. Betsy was someone who people were drawn to and she will be sorely missed by all who knew her; always a goer and a doer she said she wanted to skid into home plate all used up and she got her wish.

Betsy passed on September 27, 2018, she is preceded in death by her husband Roy and four of her seven siblings.  Memorial Contributions can be made to” The American Heart Association in memory of Betsy Davis, 1777 Harrison Rd, Suite 500, Denver, Colorado 80210.

A Celebration of Life will be held October 19th at 2:00 p.m. at the ranch in Coventry at David and Terri Andrews, please bring a covered dish to share. If weather does not permit, an alternate location will be determined.  Crippin Funeral Home & Crematory in Montrose is assisting the family.