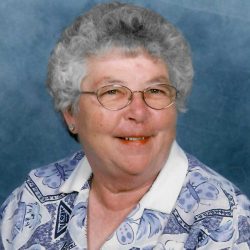 Her faith was deep as the ocean, her spirit indomitable (even at the end), and her boundless generosity.

Barbara was welcomed into the world December 23, 1939 in Ludell, Kansas to Jess Oliver and Viola Kathryn Kruesch Gamblin. Her siblings Richard, Cordelia, Cletus, Norbert, Lyle and James took special care of their little sister. The Gamblin household was chaotic and full of love and laughter. Barbara enjoyed singing, playing games with her brothers, and softball (she even played on a 55 plus softball team later in life!).  Barbara graduated from High School in Atwood, Kansas in 1957. She relocated to McCook, Nebraska. where she met her lifelong partner and love, Willard Ray McFadden. They were united in Holy Matrimony April 23, 1960. Four children were born to this amazing union over the next six years: Laura Ann, Michael Ray, Marsha Lee, and Shelley Marie. Following several moves to Wyoming and Montana, the McFadden’s relocated to Montrose in 1968. Barbara drove school bus and provided many opportunities for her children growing up including swimming, camping, music, and softball. As time flew by, Laura married Robert K Gilmore. Jennifer Kathleen and David Ryan Gilmore were blessed of this marriage. Shelley married William K O’Brien, and this union was blessed with two more additions; Kaylea Marie and Kara Michelle. Michael was united in matrimony with Susan Ellerbrock and they had three children: Benjamin Michael, Stephen Thomas and Rachel Rose. Marsha united with Robin Leonard and became mother to Eric Todd and Kristy Lee. Barbara embraced and cherished every single one of these nine grandchildren. Barbara also has five great grandchildren to spoil: Tucker J(O’Brien)Laskey, Mathew (Leonard)Van Fleet, Johnathan (Leonard)Van Fleet, Kenneth (Leonard)Van Fleet and Sophia (Leonard) Williams. She went to join her family and many friends in heaven on October 25th. She is survived by her brother James, son, daughters, grandchildren, and great grandchildren.  Barbara enjoyed bowling for many years, the Jolly Hour Pinochle Club, volunteering at Montrose Memorial, and helping at the Senior Center. She was avidly devoted to Western movies and shows.  Her faith was deep as the ocean, her spirit indomitable (even at the end), and her boundless generosity. She affected so many lives and will be sorely missed! The celebration of her life will include visitation from 5–6 PM and a prayer vigil from 6-7PM on Thursday October 29th at Crippin Funeral Home. Catholic mass will be celebrated at St. Mary’s Catholic Church on October 30th at 10 AM followed by interment at Grand View Cemetery.