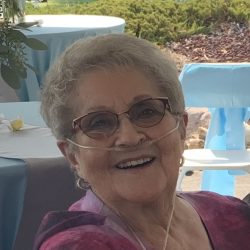 Barbara loved to play the piano.

Barbara was born September 13, 1936 in Montrose, Colorado to Clifford and Alice Sanburg.  She attended Riverside Elementary School and graduated from Montrose High School.  She married Jim Longwell and was married for 67 years.  They have two children, David and Debra.

Barbara loved to play the piano.  Many nights, we would crowd around the piano for sing-alongs.  She was also an amazing cook.  When it came time to move our cows up to the mountains in the spring, or back down in the fall, her job was to feed the crew.  She would have a full breakfast around 3am then clean up and prepare lunch.  She would deliver lunch wherever we were on the trail, then go back down and clean up again, getting ready for us to come home at the end of the day.  This usually lasted around 3 days each time.  She was the scorekeeper for the Montrose Co-op Fastpitch Softball Team, even taking a foul ball in the nose one time.

Barbara was the bookkeeper at Montrose Federal Land Bank where she retired.  She then bought her dream car.  She and Jim bought 4-wheelers and had fun spending time together.

She is survived by her husband, Jim Longwell; her children, David (Lori) Longwell and Debra (Roger) Hayward, sister Betty Donley and brother Dutch Sanburg.  Barbara has 16 grandchildren and 20 great-grandchildren.

She was a member of the Rosemont Baptist Church.

A memorial service is planned for 10 am, Friday, April 9, 2021 at the Rosemont Baptist Church, followed by an inurnment at the Valley Lawns Cemetery.