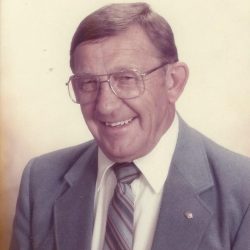 Chuck Hast, 91, of Montrose, passed away June 26, 2019. He was born July 23, 1927 to August and Ida (Schepler) Hast in Brighton, Colorado, the youngest of 10 children. His high school years were spent at St. John’s Academy in Winfield, Kansas. After graduating he joined the US Navy where he served for 3 years. Chuck attended Denver University and worked in the lumber and hardware business for 19 years in the Denver and Colorado Springs areas as well as in Moab, Utah. From 1967 to 1990 he enjoyed a fulfilling career as an insurance representative with Aid Association for Lutherans (now Thrivent).
On July 31, 1949 (almost 70 years ago) Chuck married Shirley Peters in Wausa, Nebraska.
They had 4 children: Sharlene (Bruce) Short, Susan (Gale) Everson, John (Deborah) Hast and Paul Hast. Chuck experienced much satisfaction from working with his hands; building and remodeling his family’s homes continued until he couldn’t hold the hammer any more. Grandpa constructed toys and gifts for his grandchildren, loved to go for a Sunday drive and picnic, and with Shirley raised llamas in retirement. Together they explored Germany and Ireland and drove around the US visiting children, grandchildren, extended family and friends. It seems he won a fair share of Bingo games at Valley Manor in his last few months.
Besides his abiding faith in Christ and his love for his wife and family, Chuck’s priorities were to be a friend, offer a helping hand to strangers, and never miss an opportunity to tease and joke. Extended and church families benefited from his generous service and many community members received help through his benevolence activities with Aid Association for Lutherans. After retirement Chuck volunteered with Montrose Habitat for Humanity.
Chuck is survived by his wife Shirley, all of his children, and grandchildren Christopher and Stefan Short, John (Shelly), Zach (Jannet) and Micah Everson, and Joy, Carl, Gracie, Dillon and Aaron Hast. Four great-grandchildren also survive: Isaac, Trystan, Bianca and Ethan Everson. Chuck was preceded in death by his parents and nine siblings.
A Memorial Service in Loving Memory of Chuck will be held Tuesday, July 9, 2019 at 2:00 pm at Hope Lutheran Church, 600 N 2nd ST., Montrose, Co.
Crippin Funeral Home and Crematory 970-249-2121, is assisting the family.