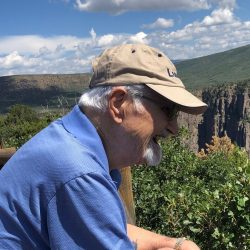 A funeral service will be held at 2:00 PM on Wednesday, October 20, 2021 at the Delta United Methodist Church, Military honors and interment will take place at Ft. Logan National Cemetery in Denver, Colorado

What is a brother?  By Jean Adkins

The dictionary says he has common ties and interest of the clan.  Be it through blood or close fellowship.  Born a year earlier than I, on a Monday, April 25th This little ditty says he is fair of face.  Tuesday’s child is full of grace, Wednesday’s child is full of woe, etc.  Aubrey Lee was nicknamed Sonny because of his sunny disposition.  In thinking of the yesteryears. When we were kids, Sonny worked in a shoeshine parlor.  He also took on a paper route.  With the money he made he bought a bicycle.  He taught me how to ride a bicycle and how to shine shoes.  I also remember how particular he was about his marbles.  He knew their names, and how many he had.  They were counted after every game.  Marbles was a boys only game, girls did not play with boys back in the old days.  There were steelies, they were metal.  The cats’ eyes and others were made of glass.

We were raised on a 175-acre farm.  We learned all the how-toos of cattle, horses, pigs, chickens, canning, preserving, hoeing, slopping hogs, carrying water and coal, canning meats, fruits, and vegetables.  We learned at an early age no work, no eat.  We are known as depression babies.

Sonny loved horses. Riding for pleasure, and hunting in the mountains, his wife said they also made nice pasture decorations on the 10-acre farm.  He had an assortment of guns that he prized.  He hunted deer, elk, antelope, pheasant, and turkeys.  When he was a young boy. His uncle gave him his first gun and he hunted skunks, skinned them, and nailed them to the hen house to dry.  He sold the hides.  And when he came in the house in wet clothes did, he ever smell.  Boys will be boys.   He disliked deep snow and not having enough wood for his fireplace.  He feared nothing but fear itself.  He attacked college, and read everything he could get his hands on, and was very knowledgeable.  His favorite color was blue.  His favorite meal was home cooked spaghetti with sausage.

Sunny was an active Mason.  He received his 50 year pin several years ago.  He memorized all their literature.  In fact, he was so good he was asked to speak to clubs and schools.  He was also active in the Eastern Star.  One year he served as Chaplain.  He and his wife visited every City in Colorado to encourage one and all.  He was very dedicated.  He was active in the Methodist church, every year on his birthday, he donated $1 for each and every year.  Age 89 meant $89.  He tithed and donated carpet for the nursery.  He was also active in the Elks and Good Sam clubs.  He loved life and family and could fix anything but a broken heart.

He had a boat, we fished on lakes, I steered the boat, (Jean you are too close to the shore).  Good fun and always good food.  We have been blessed to have him in our lives,

He retired early from the Denver Fire Department because of heart problems.

Sonny served in the U S Navy from 1952 to 1956.  He was a machinist mate on the U S Belle Grove (named after a Southern plantation.)  This ship carried the atomic bomb.  The bomb was on constant guard.   Our untrained young men shipped out and had to learn very fast.  There was an accident the first day and one of his shipmates was killed.  I cannot imagine the fear they must have had to endure.   I was very proud of him.  When he got drafted, he gave me his HARLEY, I only had to make 4 payments on it, I traded it in on my first “Olds”.

In the good Book of Ecclesiastes warns us of some of the ailments we will encounter in life.  In the days when the keepers of the house shall tremble, and the strong men shall bow themselves, and grinders cease, because they are few, and those that look out the window be darkened, and the door shall be shut in the street, when the sound of the grinding is low, and he shall rise  up at the voice of the bird, and all the daughters of music shall be brought low, they shall be afraid of that which is high, an fears shall be in the way, almond trees will flourish, the grasshopper will be a burden, desire shall fail because man goeth to his long home and the mourners go about the streets. …Then shall the dust return to earth, as it was, and the spirit shall return unto God who gave it.

One by one God is calling his people home, and one day the trumpet of God will sound, and all who believe in him shall be called home.  What a day of rejoicing that will be.  So let us go forward and celebrate Sonny’s life today by opening our hearts, and let God fill us with love.

I love you and will miss you Sonny Boy. Thank you for sharing this time with us and May God Richly Bless You

Aubrey, age 89, was born on April 25, 1932 to the late Llyod and Audrey Casto.  He was the only boy of 4 children.  His sisters Marjory and Joan preceded him in death.  He was born in rural West Virginia and graduated from High School in Panama City Florida. After graduation he moved along with 2 of his sisters to Denver Colorado.  He married Carol Scott, who preceded him in death, and a day after the marriage they headed to San Diego, CA where he started his 4 year tour of duty with the US Navy. After that service he took classes in accounting and business and migrated back to Denver, Colorado with his fledgling little family.  After several desk jobs, Aubrey put down the pencil and became a Denver Fireman.  It was a relatively short period with the Fire Department as he was injured and forced to retire for medical reasons. He started another career using his knowledge of firefighting and newly gained education in computer programming to work in the HVAC/Fire Control centers at some of the largest buildings in downtown Denver.

Aubrey Casto Married Nita Darlene Sarver on January 16, 1987, in Morrison Colorado.  They moved to Delta Colorado in 1994 and stated a new family with horses, cows, Alpacas and cats. They became members of clubs, organizations, civic groups, The Delta Methodist church and continued being a part of their “old” family.  Aubrey is survived by his sister, artist and author, Jean.  Aubrey is also survived by 4 children, Dennis, Wendy, Denise and Deann, 14 grandchildren and 1 great granddaughter.  His family and dozens of nieces and nephews span from the Pacific to the Atlantic, from the Great Lakes to the Gulf of Mexico.

Nita wishes to thank all their friends from the Masonic Lodge, The Eastern Star, the Delta Doves, the First United Methodist Church of Delta, the Elks and other groups that have been friends and given support to her and her best friend and love, Aubrey.

A funeral service will be held at 2:00 PM on Wednesday, October 20, 2021 at the Delta United Methodist Church, Military honors and interment will take place at Ft. Logan National Cemetery in Denver, Colorado