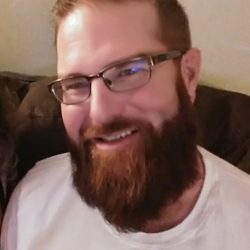 He had an enormous sense of humor, always making everyone laugh.

A celebration of life will be announced at a later date.

A private service was held for the family at Grand View Cemetery.

Aaron Lon Helmick was born on April 21, 1979 to Lonnie Monroe Helmick and Irene Leonard Helmick. He arrived at his eternal rest in God’s caring arms on October 14, 2020, way too soon! Aaron was raised in Montrose Colorado with two older sisters Amy (49) and Laney (44). Aaron had an artistic nature and loved music, classic cars, guitars, drawing, and creating metal art projects with his sister. He could play the piano by ear, also teaching himself to play the guitar at a very young age. Music and artistry were in his blood. He graduated from Montrose High School in 1997, and then attended Universal Technical Institute of Phoenix with a degree in mechanics. He worked at E’s Automotive, and then Montrose Ford Nissan for several years. He went on to become a talented welder, designing projects for many customers in Montrose and Telluride. He had an enormous sense of humor, always making everyone laugh. He always had a funny joke, a quick quip, a movie quote, or a song lyric for almost any occasion. When you were sad or even angry at him, he’d make a joke of it just to cheer you up. He was very warm hearted, making even a stranger feel welcome. If you needed help with anything, you could always count on him to lend a hand. He would stop to help a stranger, and even pray with them in a parking lot. He was married twice with no children, but was a father figure to his stepchildren and grandchildren. Aaron is survived by his dad Lonnie Helmick (Julie Anne Helmick); mom Irene Holden (Mike Holden); sister Amy Bollinger, brother-in-law Jim Bollinger, nieces and nephews Casey (Cashe & Ramye), Amanda (Dale May, Christopher, Harrison), Gabriel (Abbie), Jonathan, Anastasia, Angelina, and Alycia; sister Laney Helmick (Ron Goelz) and niece Kaitlyn (Matt Gillioun, Ember, Remi); and fiancé Angie Johnson (Piper and Porter); also Uncle Bruce Cranor and cousin Wendy Pierce, Jana Yoho , and Heidi Wiggins.  He is preceded in death by grandparents John & Helen Leonard and Rex & Martha and Helmick, uncle John & Aunt Darla Biddulph, cousin Jamie, and and Ilene Cranor and nephew Nicholas Aaron Bollinger. We will miss this awesome young man more than words can express! May God hold him in His loving arms until we can all see him again. A celebration of life will be announced at a later date.

A private service was held for the family at Grand View Cemetery.